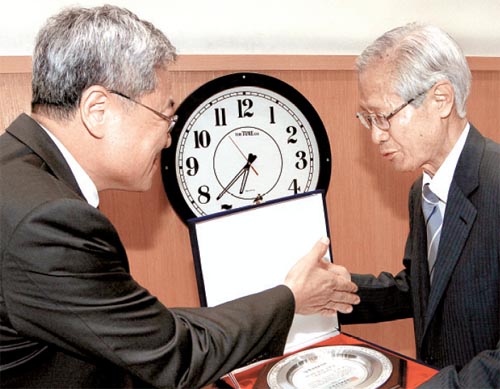 Choi Hyeon-cheol, then-president of the Korean Society of Journalism and Communication Studies, awards Kim Young-hie, editor-at-large of the JoongAng Ilbo, for his contribution to media development, on Oct. 16. By Choi Seung-sik


The Korean Society for Journalism and Communication Studies awarded Kim Young-hie, editor-at-large of the JoongAng Ilbo, a “contribution award in media development” on Oct. 16 at the general meeting of the academy at Seoul National University.

Marking its 51st anniversary, the society established the award to pay tribute to professionals who are dedicated to the improvement of journalism and broadcasting.

At the event, Kim remarked on the future of journalism and the importance of collaboration between the media and university professors.

“Looking back on my 52 years as a journalist, the current media is undergoing a groundbreaking transformation. The change is not only a critical crisis, but a crucial chance,” Kim said.

Beginning his career as a reporter covering international news at the Hankook Ilbo in 1958, Kim has dug deep into international affairs for over 50 years.

Kim was the first journalist in Korea to cover the assassination of John F. Kennedy in 1963. In 1965, he moved to the JoongAng Ilbo during the newspaper’s founding year.

After working as an executive member in charge of publication and culture media, Kim returned in 1995 to his reporting roots at the age of 59. Fueled by his abundant experience, Kim became editor-at-large.

Kim is also well known for his interviews with a slew of high-profile celebrities.

The list of his interviewees includes Arnold J. Toynbee, a British historian who he met with in 1965; conductor Leonard Bernstein in 1978; bestselling American writer Sidney Sheldon in 1996; sociologist Anthony Giddens in 1998; Tony Blair in 1999, who was at the time prime minister of the United Kingdom; Mikhail Gorbachev, former Communist Party secretary general of the Soviet Union in 2001; and futurist Alvin Toffler in 2007.

A well-read columnist, Kim digests an average of ten foreign books per month and is said to go to Japan every four months to purchase books.

His columns are known for getting to the bottom of issues. For this, Kim has been acclaimed by fellow journalists. “Kim shows the path Korean journalism should take. Professionalism surpasses all the factionalism and deviationism,” said Kim Min-hwan, honorary professor at the School of Journalism and Mass Communication at Korea University.

Praise is not only limited to Korean journalists.

Funabashi Yoichi, chief columnist for the Asahi Shimbun, said of Kim: “He is the great reporter of the East, equipped with balance and dignity.