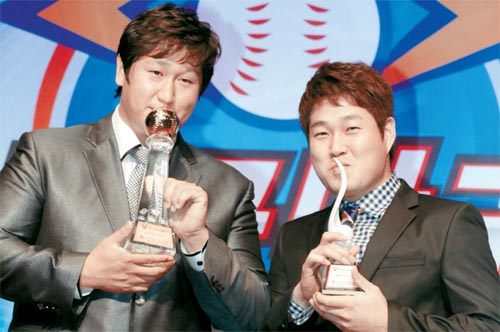 Lee Dae-ho of the Lotte Giants, left, was named this year’s Most Valuable Player, while Yang Eui-ji of the Doosan Bears won Rookie of the Year honors at the annual KBO awards ceremony at the Grand Intercontinental Hotel in Gangnam, southern Seoul yesterday. [YONHAP]


Lee Dae-ho literally had his hands full at the KBO’s annual awards ceremony yesterday as he won the Most Valuable Player award and seven additional trophies for a monstrous season in which the Lotte Giants slugger led the league in seven offensive categories. As expected, Yang Eui-ji of the Doosan Bears won the Rookie of the Year award.

Lee easily won his first MVP award by garnering 59 of 92 media votes over left-handed pitchers Kim Kwang-hyun of the SK Wyverns and Ryu Hyun-jin of the Hanwha Eagles. Lee became the first player in KBO history to lead seven offensive categories and also set a world record by hitting home runs in nine consecutive games from Aug. 4 to 14.

The only offensive category he failed to lead was stolen bases. Lee hit .364 with 44 home runs, 133 RBI, 99 runs scored, 174 hits, a .444 on-base percentage and a .667 slugging percentage. Lee did not record a single steal this season and has a total of seven steals in his 10-year career.

“It took me 10 years to reach this point,” Lee said. “I really wanted a chance to stand up here. I’m honored to have received so many trophies and I want to say thanks to my former manager Jerry Royster and hitting coach Kim Moo-kwan.

Having made a name for himself as a strong batter and a dominating pitcher at Kyungnam High School in Busan, Lee was drafted as a pitcher in the 2001 Amateur Draft by the Giants. Lee suffered a bit of a setback when he had shoulder injury in his rookie season. He then switched positions to third base and has manned Lotte’s cleanup spot since the 2004 season.

Although this is the 28-year-old veteran’s first MVP award, he came close to collecting the award in the 2006 season. Lee captured the triple crown that season, batting .336 with 26 home runs and 88 RBI. It was the first time in 22 years that someone had hit for the triple crown in the KBO, but Lee was edged by Ryu Hyun-jin, who led the league in wins, ERA and strikeouts in his rookie season.

This year, Ryu again led the league in strikeouts (187) and ERA (1.82), but Kim Kwang-hyun led the league with 17 wins and also played a crucial role in SK’s Korean Series win.

Lee can expect another positional switch next season. Lotte’s new manager Yang Seung-ho said in a recent radio interview that he would play Lee at first base in 2011. While easily the most dominant player at the plate this season, Lee’s lack of mobility was a poor fit at third base.

Doosan’s Yang received 72 of 92 media votes to win the Rookie of the Year award. The 24-year-old catcher made a late debut this season after serving his mandatory military service with the National Police Agency. He also played on the agency’s baseball club, a second-tier minor league club, to keep practicing his craft.

Drafted 59th overall in the 2006 KBO Amateur Draft, Yang joined the NPA baseball club after spending the 2007 season with Doosan’s minor league affiliate. Having honed his swing and defensive skills over two seasons with the NPA, Yang matured into a better player and returned to Doosan this season.

Yang took full advantage of the opportunities in his rookie season, smashing two home runs in his first ever start in a KBO game against the Nexen Heroes on March 30.

Yang never looked back and became the first ever rookie catcher to hit 20 home runs in a season, and also batted .267 with 68 RBI, a .471 slugging percentage and a .348 on-base percentage.

“I want to thank those who voted for me today,” Yang said. “I also want to thank my teammates and my parents who went through a lot. I’ll accept the award to mean that I will have to try harder from this point on and will work to produce a stronger season next year.”

With the 2010 Asian Games national baseball team gathering for training in Busan yesterday, Lee joined his teammates last night and will participate in the first day of training today at Sajik Stadium.