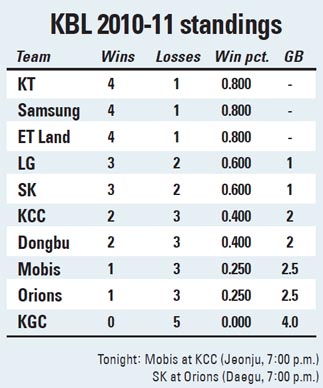 The absence of three starters has had no noticeable impact on the Samsung Thunders in the early stages of the KBL season. Samsung is currently tied for first with the KT Sonicboom and the ET Land Elephants.

A trio of reserve players - Lee Won-soo, Cha Jae-young and Kim Dong-uk - have stepped up and filled in admirably for normal starters Lee Seung-joon, Lee Kyu-sup and Lee Jung-seok, who will miss nine KBL games to represent Korea at the 2010 Guangzhou Asian Games.

“The strong play of the three reserve players was a big factor in our two consecutive wins,” said Samsung coach Ahn Joon-ho. “They provided big plays on offense and defense throughout the game.”

The team has won two of its last three games since losing the three Lee’s.

Guard Lee Won-soo has been consistent as a replacement for Lee Jung-suk, connecting on four of five shots against the LG Sakers. One of his baskets was a clutch fourth quarter 3-pointer.

Cha Jae-young has also come up big, scoring in the double digits in three consecutive games, while Kim Dong-uk connected on all six of his shots against the Sakers. Kim has nearly doubled his scoring average to 11.8 points per game.

“With a lot of key players missing from our lineup, I’ve been looking to take advantage of scoring opportunities,” said Kim. “But I’m more confident in my defensive game. I want to chip in with a strong defensive performance this season.”