In midst of mushroom bumper crop, be careful of what you eat

In midst of mushroom bumper crop, be careful of what you eat

Red flags should have gone up for Seo Gyeong-seok when the market vender told him the mushrooms he was about to buy were handpicked in the mountains.

“The person who sold me the mushrooms at my local market said that they were fresh mushrooms he picked himself that are good for you,” said Seo, who lives in Chuncheon, Gangwon. Just 20 minutes after eating them, he became nauseated and was soon vomiting and experiencing stomach pains.

The mushrooms Seo consumed were a poisonous species called Rhodophyllus rhodopolius, which are commonly mistaken as edible mushrooms. He was immediately hospitalized. Under treatment for prostate cancer at the time, Seo considers himself lucky to have survived his run-in with the poisonous fungi.

This sort of case is common in Korea around this time of year, warned Son Chang-hwan, an emergency treatment doctor at the Seoul Asan Hospital, but this season is proving to be especially deadly.

“Due to high temperatures and humidity in Korea, we’re seeing more growth of not only edible mushrooms, but poisonous ones as well,” he said. 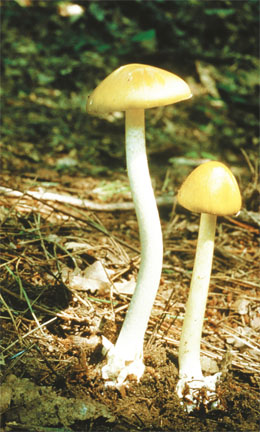 Experts advise people not to buy hand-picked mushrooms from people they do not know well. There are thousands of kinds of mushrooms, many of which are poisonous, and it can take a trained eye to differentiate a Rhodophyllus rhodopolius from a Pleurotus ostreatus.

You can even call it “poison mushroom season.” The combination of perfect climactic conditions for mushrooms, Koreans’ penchant for hiking in October, and the popularity of wild mushrooms create a perfect storm for stomachaches.

Seoul Asan Hospital’s toxic substance department received 13 patients who had consumed poisonous mushrooms between Sept. 26 and Sept. 29. The hospital said it had been seeing so many patients hospitalized after consuming poisonous mushrooms that it kept track of the cases for those four days, something it does not usually do.

Out of the 13, 11 patients claimed that they mistakenly ate poisonous mushrooms during a hike thinking they were edible. 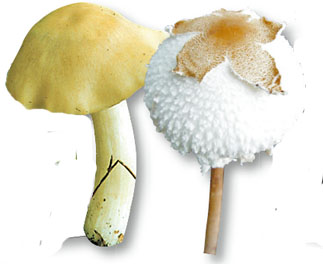 This year has been one of the worst for mushroom poisoning.

“We already saw 40 patients in August and 38 patients in September. Out of these cases, there were four deaths,” said Seok Soon-ja, a researcher at the Rural Development Administration. “We are assuming that there are a lot more incidents that are simply not being reported.”

There are over 1,600 species of wild mushrooms nationwide. Around 10 percent are classified as poisonous and have toxic chemical compounds such as amatoxin, monomethyl, hydrazine, coprine, muscarine, ibotenic acid and mucimol. The most dangerous are those that have amatoxin components that grow in the late fall.

“Fungi such as Amanita subjungquilea, Amanita virosa and Amanita verna, all of which have amatoxin in them, can be fatal after eating just one,” said Seok. “These mushrooms can cause hemorrhagic gastritis, acute heart failure and liver failure.” The researcher added that the main problem is that these dangerous fungi look very similar to those that are safe to eat.

A husband and wife made that mistake on Oct. 3.

After eating as many as 20 of these toxic mushrooms over a period of 14 hours, they started experiencing vomiting, nausea, diarrhea, stomachaches and weakness.

Their symptoms did not improve even after they were hospitalized, and by Oct. 8 they were in need of liver transplants.

Seok, the researcher, said poisoned victims typically have only two hours to get to a hospital before treatment becomes complicated. “But those that occur after six hours usually have unfortunate consequences and do not improve easily.”

Out of 123 mushroom poisoning victims from 2000 to 2009, 13 died, according to statistics from the Rural Development Administration.

Almost all of these cases occur due to confusion between edible and inedible mushrooms. In Gyeonggi and South Chungcheong, people fail to distinguish Rhodophyllus rhodopolius from Collybia confluens. Those that live in Gangwon might confuse Sarcodon scabrosum for Sarcodon aspratus. In South Gyeongsang, it is dangerous to mix up Amanita subjungquilea and Cantharellus cibarius, while in Jeju, there is confusion between the poisonous Macrolepiota neomastoidea and the edible Macrolepiota procera.

“Many people have the misconception that poisonous mushrooms have a fancy look about them and are fashioned in primary colors, do not pull from the ground easily and don’t have signs of bug consumption,” said Ga Gang-hyun, a researcher at the Korea Forest Research Institute.

Another misconception is that boiling or pickling poisonous mushrooms makes them safe to consume.

To avoid these incidents, Son advises against eating wild mushrooms and guessing the type from pictures. It is possible to send a sample to the Rural Development Administration or the National Academy of Agricultural Science (031-290-0365) to receive a reliable answer.

“When you start seeing symptoms after eating mushrooms, go to the nearest hospital as fast as you can,” Son said.