Led by Park, Korea up against challenges in the pool

Led by Park, Korea up against challenges in the pool 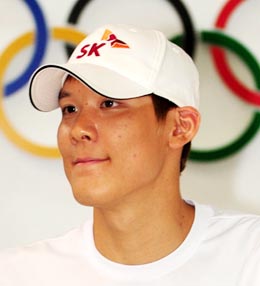 HONG KONG - Inspired by Park Tae-hwan, Korea will face tough competition in the pool at the 2010 Asian Games. Four-time Olympic gold medallist Kosuke Kitajima will spearhead the Japanese challenge as the team readies for battle against rival China.

China and Japan were locked at 16 golds each in swimming events at the 2006 Asian Games in Doha, with Korea trailing at a distant third.

The star of the pool could be Korea’s Park, who dominated in Doha, winning seven medals, including three golds, to be named Athlete of the Games.

Park, who went on to win his country’s first Olympic swimming medal two years later in Beijing in the 400-meter freestyle, took gold as a 17-year-old in the 200-meter, 400-meter and 1,500-meter freestyle events at the 2006 Asian Games.

After a difficult 2009, in which he flopped at the world championships, Park has returned to his winning ways, taking the 400-meter freestyle title at the Pan Pacific Swimming Championships, beating Chinese rival Zhang Lin, who came in third.

Leading the way for the two Asian swimming powerhouses are Kitajima Lin.

Kitajima comes into the Guangzhou Games in sparkling form, winning the 100-meter and 200-meter breaststroke at August’s Pan Pacific tourney in Irvine, California. He is part of a team of 29 swimmers, nine fewer than the number of athletes allowed by Japan’s Olympic Committee.

“The Asian Games is the most important competition this year. We formed a small [but elite] team,” said Koji Ueno, head of the Japanese swimming team.

Aside from Kitajima, who took gold in the 100-meter and 200-meter breaststroke at the 2004 Athens Games, he retained both titles in Beijing - other top swimmers from Japan include world 100-meter backstroke champion Junya Koga and rival Ryosuke Irie.

Aya Terakawa is a favorite in the women’s backstroke after finishing as runner-up in the 50-meter and 100-meter at the Pan Pacifics. Kitajima set a world record by winning the men’s 200-meter breaststroke at the the 2002 Asian Games in Busan, where he also won the 100-meter, before repeating his double victory at the 2006 games.

Speaking about his performances at the Pan Pacifics, Kitajima said: “It gave me a lot of confidence. Those were the results of my new training method.”

Host nation China is sending 56 swimmers to Guangzhou, with head coach Yao Zhengjie banking on a boost from the home crowd.

“Although Japan’s swimming team is strong, we need to make use of our home advantage to beat them. We want, and we need, to beat Japan in our home country. We’re confident about out-scoring them,” he said.

In the 1,500-meter freestyle, Sun Yang, the world’s No. 1 swimmer in the event as of early November, is looking to top the podium.

Liu Zige, an Olympic champion and world record holder in the women’s 200-meter butterfly, will miss the Asian Games, meaning China’s hopes in that event will rest with 2008 Olympics runner-up Jiao Liuyang.

China’s women are also strong in team events, winning both the 4x200-meter freestyle relay and the 4x100-meter medley relay at last year’s world championships in Rome.