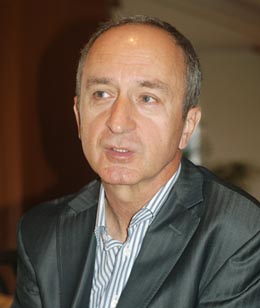 Poland and Korea ‘can offer inspiration to other countries. We have achieved success, and so can they,’ said Janusz Reiter, president of the Center for International Relations. By Moon Gwang-lip

Korea and Poland have more in common than one might think. Both countries have a past marred by invasion, but they have achieved success in the present day. Often, the two countries are also called upon to serve as a bridge between neighboring countries. In this respect, the two countries can learn a great deal from one another, said Janusz Reiter, president of the Center for International Relations, a leading think tank in Poland, in an interview in Seoul on Tuesday.

“Historically, Poland was considered a country that was hopeless in terms of its geopolitical situation, sandwiched between the big powers of Germany and Russia,” Reiter, who also served as Poland’s ambassador to the United States, said.

“Today Poland is living in a totally different environment: Germany is our closest ally and friend in Europe. Russia is much more difficult, but we are now starting a new process of what could be called reconciliation with Russia,” Reiter said.

His words might resonate with many Koreans, who used to blame the country’s place in the world on its peninsular location, which left it exposed to invasions from Japan and China in the past.

But today, the challenge of geography presents an opportunity for Korea, which is hoping to play a major role in facilitating the construction of a prosperous East Asian block with fast growing China and slow-but-steady giant Japan.

Next week, Korea is to host the Group of 20 Summit in Seoul, and observers here expect that it will help position the country as a bridge not only between East Asian countries but also with the world.

During the summit, Korea plans to introduce a 100-point “action plan” to balance economic development between rich and developing countries. It will also address currency, trade and other economic imbalances.

Korea is the first among the non-G-8 countries to host the G-20.

“This is really so impressive, so inspiring,” Reiter said. He pointed to the Korea’s economic and political success as the reason the country was selected to host the event.

Poland, an EU member, has had its own share of economic success. Last year it recorded the highest growth rate among the Organization for Economic Cooperation and Development countries.

In assessing the successes Korea and Poland have achieved, Reiter said, “I think both of our countries can offer inspiration to other countries. We have achieved success, and so can they.”

Reiter said, however, that Poland’s transformation was the result of more than just economic and political improvements.

Reconciliation was another factor in Poland’s success. That, he said, is a lesson that Korea and its neighbors, especially Japan, could learn from.

Poland lost more than 6 million people in World War II, during which Germany and the Soviet Union occupied the country. After the war, it remained under communist rule, allying with the Soviet Union until it collapsed.

Poland eventually achieved reconciliation with its two neighbors, but it was a long, drawn-out process, Reiter said. “Even in the 1960s and 1970s Polish people had many doubts about reconciliation,” he said.

But as deep as the wounds of war were, sincere reflection on both sides helped build relations between the countries over time, in particular between Poland and Germany, he said. He offered as an example the story of a Polish Catholic bishop who sent a letter to a German bishop. The letter said “we forgive and we ask for forgiveness.” It was sent in 1966.

The gesture impressed many people in Germany, which also did its part toward reconciliation by condemning the Nazi regime.

Although Reiter was cautious about making a direct comparison between the countries, he said that a parallel could be drawn with Korea’s relationship with Japan, which maintained colonial rule over the peninsula from 1910 to 1945.

Meanwhile, reconciliation between Poland and Russia is relatively slow, but is underway, Reiter said.

In the Katyn massacre of 1941, which he described as a symbol of Soviet crimes against Poland, thousands of Polish officers were killed by the Soviets. The Soviets denied the incident and blamed Germany, but it recently acknowledged the killings.

“History is only history. The future is much more important. But if people have doubts about history, that it’s being manipulated, it is extremely explosive,” he said. “Reconciliation was not built on a denial of history.”