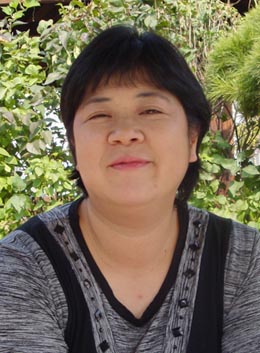 In a room surrounded by plain glass walls, 10 women with different hair and skin colors shout out simple Korean words, with some tapping their chests as they struggle to come up with the right expressions. A native Korean teacher is there to help but she finds it difficult to understand what they are trying to say. As the teacher’s attempts end in vain, she reaches out to a woman with the nickname “mom,” who smiles kindly at her “daughters.”

After observing their facial expressions and hand gestures and listening to a few broken Korean sentences, she comes up with the right expression. The women laugh with joy and applaud. Yoko Yasda, a 47-year-old Japanese woman, is mom to these immigrants from seven different countries.

When asked about her nickname, Yasda laughs and says, “They call me that because I’m too old, as old as their mothers.”

This is true to some degree, since most of her colleagues from the Seoul Women’s Plaza are in their 20s. Their make-up is bright with pink tones, while Yasda wears nothing but a basic foundation. Youth lies in their short skirts, while maturity rests in Yasda’s neat black pants.

“She’s just like a mom,” said Yeon-na, a native of Indonesia who is married to a Korean man. “She takes care of us when we’re sick and helps us when we go through trouble. We talk about our married life and family problems with her, like we would have done with our own mothers.”

When her friends get homesick, Yasda is the one to call.

“Everyone wants to run to their parents when something difficult happens,” Yasda said. “Yes, we can call them abroad, but it makes you realize again that they are far away.”

When her girls get depressed after a phone call home, she gathers them together and takes them out.

Mothering these nine women and her own four children is not enough for Yasda. Besides her job as a lecturer for Seoul Women’s Plaza, she also leads a Korean Red Cross aid program for immigrant women. The 30 women she trains, also all immigrants, in turn reach out to other women.

Yasda said she understands how isolated they feel during their first few years in a new environment. “They know that I’ve been there and I can see how much comfort they get from just talking with me,” she said.

Helping others is not new for Yasda. Before she married a Korean man and moved to Korea in 1998, Yasda traveled all over the world to help the weak, especially women. She volunteered for an NGO called the Women’s Federation for World Peace, where she planned service programs, leading her own group of volunteers in each one.

A handmade poster from her friends in the Japanese NGO hangs on her office wall. It is covered with personal messages that include the phrase, “Honey Yoko,” which seems to have been her nickname back then.

Yasda’s desk is decorated with her favorite Japanese cartoon character, Doraemon. The blue robot looks like a smiling bear. It has a round face and eyes that comfort, just like Yasda’s. In the cartoon, Doraemon helps its timid owner get along with his friends and runs to him whenever he is in trouble. Just like her favorite character, Yasda’s day is always busy helping others.

When one of her teammates from Indonesia enters the office, Yasda gently holds her hands and asks, “How did it go with your visa?”

When this elicits a negative response, Yasda starts calling every Korean she knows to solve the problem. After a round of phone calls and text messages, Yasda softly taps her colleague’s hands. “It’s all being taken care of honey, you can relax.”

In the cartoon, Doraemon gets a big hug from its owner in return for help. Yasda, likewise, receives a heartfelt message from a Japanese woman saying, “Thanks not only for the great lecture but for all the heart-warming advice. I was very touched!”

Yasda smiles as she reads the message and cleans her desk to wrap up the day.

“See, this kind of thing is what keeps me going,” she says. “Once you have felt it, you just can’t stop.”

Yasda hopes to continue her work. She enjoys her current job, which is to teach children how to coexist with the rising number of multiethnic families in Korea. But she still wants to help others in more direct ways.

“I want to be a consultant for multicultural families,” Yasda said. “They have their own problems and I know what they are after 11 years of marriage. I can help.”