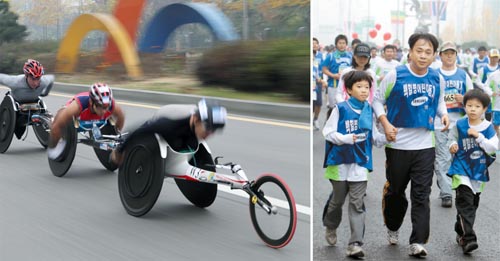 
More than 20,000 committed athletes yesterday took part in the JoongAng Seoul Marathon, both on foot and in wheelchairs.

Among them were 17 people that competed in wheelchairs and 17 that used guides.

The JoongAng Seoul Marathon 2010 was co-hosted by the Korea Association of Athletics Federations, JoongAng Ilbo and Ilgan Sports.

For the full-course division, 22,057 people competed.

“I came to the marathon event with two other friends ... I often participate in marathon contests held in Korea because it makes me feel refreshed whenever I run. I am happy to run with so many Koreans,” said Tony Joncour, a 34-year-old American member of Seoul Flyers Club. The mainly foreign running club said 35 of its members participated.

The number of foreign participants increased by 22 percent to 227 from a year ago.

“It is the utmost pleasure for me, who has to sit in this wheelchair for the rest of my life, to compete every minute,” said Kim.

Kim became disabled in an accident in 2004 when he severely injured his spine. He did not succumb to depression, but turned his passion to wheelchair marathons. “When I saw a handicapped athlete complete in a full-course marathon, I yelled out ‘this is it.’” He said he will compete in the 2010 Asian Para Games in Guangzhou, China for the Korean national team in multiple events.

Lee Cheol-seong, 44, who has a seeing and hearing disability, finished the 42 kilometer course with a time of 2:59:21. He was one of 17 people to run in the masters race with the help of a guide.

He said it would not have been possible without the assistance of Kim Jong-nam, his guide runner. “Without the help of Kim, I could not have made a sub-three.”

Looking at the participants by ratio, 86 percent were male runners and those in their 40s accounting for 40 percent of the total.