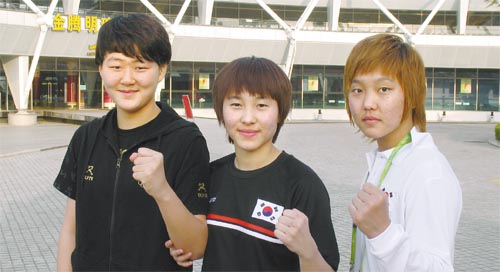 GUANGZHOU, China - At the Foshan Gymnasium, three youthful-looking female boxers with their teeth clenched and their workout shirts drenched in sweat are busy working the heavy bags. In the background, a boisterous head coach urges them on with directives.

“Eun-ah, you have to throw combinations!” shouted head coach Na Dong-gil. “Jin-ah, do not back away from your opponent.”

Just as their individual styles are different in the ring, the three boxers got their start in the sport for very different reasons. Park decided to take up boxing after entering a high school specializing in sports.

“I had a choice of judo or boxing and I decided to go with boxing,” said Park. “It’s a tough sport and there were times when I regretted my decision and I even decided to quit at one point but I don’t have regrets anymore.”

“Other boxers say their parents have a difficult time watching their matches but my mom’s usually in the front row yelling at me to throw more punches,” said Jung. Asked if she’s not weary of being punched by her opponents, Jung replied with a chuckle: “You get kicked by your opponents in taekwondo. Kicks hurt a lot more.”

Sung, the youngest of the group, started boxing a year ago with the goal of losing weight. However, her trainers urged her to try for the national team. Measuring 176-centimeters (5 feet 8 inches), Jung’s trainers saw her size would be a big advantage for her.

“I skipped meals and trained hard for a month to drop my weight to 69 kilograms,” said Sung. “But I was told that I would be competing in the -75 kilogram division so I had to gain weight. I got up to 71 kilograms and I needed to put on more weight but it’s tough.”

The trio also have different outlooks on their long-term goals.

“Since I don’t receive any scholarships, I have to focus on my studies,” said Park. “Since the Asian Games is a big event, I put in many hours of training. I want to do well here and then continue with my studies.”

Having reached the quarterfinals at the 2010 AIBA Women’s World Championships in Barbados, Jang is projected to have the best shot of the three for reaching the medal rounds.

“After Asiad, I want to work for the Korean Amateur Boxing Federation and attend graduate school,” stated Jang. “As the first generation of female boxers, we need to do well here and pave the way for other boxers.”