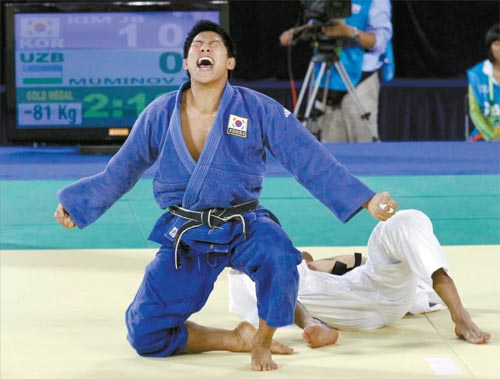 Kim Jae-bum celebrates after defeating Shokir Muminov of Uzbekistan in the under-81 kilogram division final at Huagong Gymnasium, yesterday. [YONHAP]

The 25-year-old won his first Asian Games gold by defeating Shokir Muminov of Uzbekistan by ippon, the decisive point that wins a match, in the men’s under-81 kilogram division at Huagong Gymnasium.

Kim is currently enjoying the best season of his career after coming up short in international competitions in the past. Kim had been a top prospect in the under-73 kilogram division but was overshadowed by Lee Won-hee and Wang Ki-chun.

After he failed to qualify for the 2006 Doha Asian Games he moved up a weight class in 2007. Despite being a strong candidate to win a gold at the 2008 Beijing Summer Games, Kim had to settle for a silver after losing to Ole Bischof of Germany. The gold continued to elude him the following year at the 2009 Rotterdam World Championships when he broke a rib in the earlier rounds and ended up placing third.

Meanwhile, on the opening day of competition, Hwang Hee-tae and Kim Soo-hwan won gold medals in the under-100 kilogram and over-100 kilogram weight divisions, respectively.

Hwang, 32, the oldest judoka on the squad, managed to defeat Takamasa Anai in the finals to win back-to-back Asiad gold medals. Hwang won a gold in the under-90 kilogram division at the 2006 Doha Asian Games. He defeated Anai - who recently won the 2010 Tokyo World Judo Championships - to become the first judoka to win back-to-back golds in two different weight classes at the Asiad.

“I studied video clips of my opponents,” Hwang said after the match. “I’m just happy to still be competing at my age. I’m the oldest judoka at the Asiad in any weight division.”

Kim defeated Abdullo Tangriev of Uzbekistan in the final to earn a gold in his first Asian Games.

With the win, the 22-year-old senior at Yongin University earned an exemption from his mandatory military service.

The same day, Jeong Gyeong-mi won the lone gold medal for the women’s squad by defeating Akari Ogata of Japan in the women’s under-78 kilogram division.