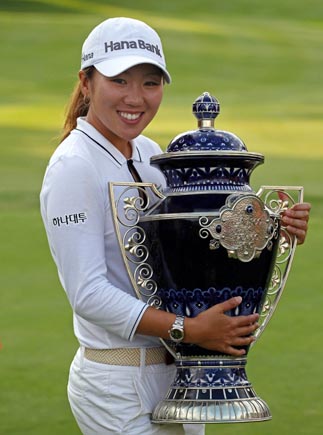 GUADALAJARA, Mexico - Korea’s Kim In-kyung won the Lorena Ochoa Invitational on Sunday for her third LPGA Tour title, closing with an 8-under 64 for a three-stroke victory over Suzann Pettersen.

Kim had a tournament-record 19-under total on the Guadalajara Country Club course and earned $220,000, which she said she’s donating to charities including the Lorena Ochoa Foundation.

“I don’t know how to really take this all in,’’ Kim said. “But it’s been a great week. I mean, on the golf course, I played very good golf all week. The putts pretty much kept dropping today.’’

Kim thanked her parents and people who supported her for making sacrifices to send her to the U.S. when she was 16.

Pettersen shot a 68. The Norwegian star has six second-place finishes and 11 top-five finishes in 18 starts this season. But she’s winless since the 2009 Canadian Women’s Open. Pettersen had a double bogey on the fourth hole.

“Hit one bad shot and that cost me two shots,’’ she said. “And she made a birdie on the last. It kind of it felt like I gave her a gap. But other than that, I made some great putts coming down the stretch.’’

Ochoa, playing her first LPGA Tour event since retiring in April, shot a 74 on her home course, leaving her 19 strokes off the pace in 25th place.

“For sure I wanted to play better, but I think it was important for the week for me to try to enjoy it as much as I could, and that’s what I did,’’ Ochoa said.

“It was the first time to have my husband on the course, and I think we both had a good time. And I want to say ‘thank you,’ to the players for being here and making this tournament so special.’’

Husband Andres Conesa, the CEO of Aeromexico, caddied for Ochoa. Kim praised Ochoa after the victory.

“She’s just down to earth,’’ Kim said. “She is always there. She is not just a great golfer. She has great warm heart. So that’s why she’s my idol. I don’t have many idols. I want you to know that.’’

Kim also won the 2008 Longs Drugs Challenge and 2009 LPGA State Farm Classic. The tour is off the next two weeks until the season-ending LPGA Tour Championship on Dec. 2-5 at Grand Cypress in Orlando, Florida.