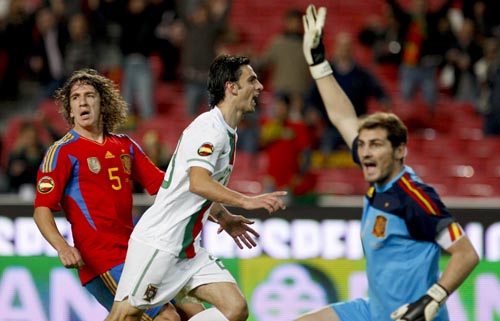 The heavyweight clashes were the stand-out matches on a night of almost 40 friendlies around the world, where swathes of debutants stepped into the international limelight as their coaches took the opportunity to experiment.

There were a clutch of impressive away wins in Europe as France beat England 2-1 at Wembley; Belgium upset Russia 2-0; Norway overcame Ireland 2-1; and Greece defeated Austria 2-1. World Cup runners-up the Netherlands beat Turkey 1-0 but several of Europe’s other big guns failed to ignite.

Germany was held to a goalless draw in Sweden; Italy, with four debutants, drew with Romania 1-1 in Austria, in a game marred by racist chanting from Italian fans. Denmark against the Czech Republic also ended 0-0.

In the night’s two Euro 2012 qualifiers, Croatia beat Malta 3-0, and Finland thrashed San Marino 8-0. The World Cup is becoming a distant memory for Spain, which since their July triumph has lost 4-1 to Argentina and had difficulty beating Scotland in a Euro 2012 qualifier.

Spain beat Portugal 1-0 in the second round in South Africa, but despite having a near-full-strength side, they were outclassed and slipped to their worst defeat since Scotland beat them 6-2 in 1963.

Carlos Martins just before the break and Helder Postiga with a backheeled goal just after, put the hosts in control. A second for Postiga and Hugo Almeida’s stoppage-time fourth had the home fans in dreamland.

The money-spinning duel in the desert between Brazil and Argentina promised much but delivered only after a cagey 90 minutes had been played. Ronaldinho, left out of Brazil’s World Cup squad, looked lively on his comeback and almost scored with a back heel. But in the second minute of stoppage time Messi showed why he inherited the crown. The striker picked his way through a ragged Brazilian defence showing great control before angling in a low shot. It was Argentina’s first win over Brazil in six matches since 2005.