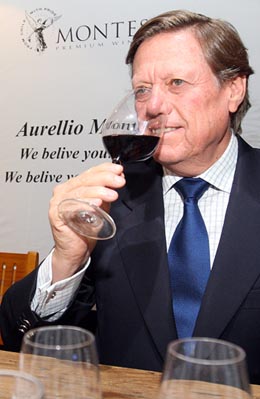 With the rapid growth in the Korean wine market in recent years, competition has grown ever more fierce to meet the rising demand.

Aurelio Montes, founder and chairman of Chilean winery Vina Montes, said his winery’s diverse variety of high-quality wines are more than up for the challenge. He was in Seoul earlier this month to promote the wine.

He said that Vina Montes, which is one of the most recognizable Chilean wines in the United States, would continue to thrive in the Korean market despite the expected flood of European wine as a result of the free trade agreement between Korea and Europe. He predicted that the free trade agreement between the United States and Korea - if it ever gets ratified - will have little effect on Vina Montes because they produce a wide variety of quality wine at an affordable price.

Part of the reason Montes is so confident has to do with his belief in the production process, which he said incorporates elements of feng shui. Water runs in front of the winery entrance, he said, and when the grapes are delivered they are rolled from the roof with the aid of gravity. To provide a human touch, music is played in the storage area, he said.

Korea is increasingly important for winemakers, a fact that Vina Montes is well aware of, he said.

Korea is the second-largest market for Chilean wine companies after the United States. Vina Montes exports 95 percent of its wine to 60 countries. In the Korean market, the winery is the best-selling wine brand by volume.

Montes said he is confident that the Chilean winery will sell 4 million bottles this year.

The secret behind the wine’s popularity is variety, Montes said, adding that Vina Montes’ wines complement Korean dishes from beef to fish.

Alpha is the most popular wine in the Vina Montes cellar, because of its uniform taste, the chairman said. He described it as a graceful wine thanks to the ripe fruit used to produce it.

He also said, however, that it isn’t as easy to be successful in the Korean market as it was when wine first became popular here. He said wineries that want to enter the country now need to be more passionate and creative in their approach to the market.

The winery’s sales target is $42 million, Montes said, adding that its annual production is 700,000 cases.

Vina Montes’ success is an outgrowth of the collaboration among its founding partners, all of whom are wine experts, Montes said.

The winery was formed through a partnership among Montes, the late Douglas Murray, Alfredo Vidaurre and Pedro Grand. It opened in 1988.

The angel drawn on every Montes label was inspired by Murray, who had a near-death experience at a very young age. It is a symbol of protection and prosperity.

Founding member Vidaurre passed away in 2008, and Murray passed away in July this year. Prior to his death, Murray, who was responsible for the export side of the business, visited Korea 14 times. Montes Cherub and Star Angel, which are new additions to the winery’s wine list, were created to commemorate Vidaurre and Murray.