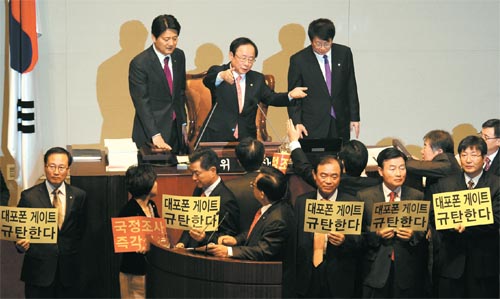 Democratic Party lawmakers take over the podium of the Special Committee on Budget and Accounts in the National Assembly to oppose an investigation into lawmakers who have been accused in a money-for-legislation scandal. [NEWSIS]


Amid a continuing legislative boycott by the Democratic Party, the ruling Grand National Party opened a session yesterday of the Special Committee on Budget and Accounts to deliberate next year’s budget only to face fierce protests from opposition lawmakers.

The session quickly turned into mayhem when the Democrats took over the committee chair’s podium and stopped the Grand Nationals from proceeding with the deliberation. The lawmakers shouted at each other, exchanging political attacks throughout the day.

For the third consecutive day, the Democratic Party boycotted all legislative sessions linked to budget deliberations in protest of the prosecution’s recent arrests of lawmakers’ staffers to investigate a money-for-legislation scandal. Three staffers to two DP lawmakers were arrested on Tuesday as part of the expanding investigation into the scandal.

Lawmakers of both ruling and opposition parties were suspected of receiving money from a security guards association called the Cheongmok Club in return for a favorable legislation to improve their benefits.

Enraged Democrats have said the probe was a politically motivated move to suppress the opposition.

The first session of the budget committee was originally scheduled for Wednesday, but the session never took place because of the Democrats’ boycott. The Grand Nationals yesterday went ahead and opened a session on its own and criticized the opposition lawmakers for “failing to fulfill their legislative duty.”

The Democrats reacted emotionally, overrunning the committee chair’s podium and holding up picket signs. They said the budget deliberation should take place only after the Lee Myung-bak administration admits to its alleged abuse of power and stops the Cheongmok Club probe, which they think could lay bare lawmakers’ political fund-raising.

“The illegal surveillance into civilians and politicians is an infringement upon democracy, oppression of the people and an act of disarming the National Assembly,” said DP Representative Jun Byung-hun. “Will there be an earth-shaking change if the budget deliberation is delayed for a couple of days? The budget review can start only after measures are established to prevent further power abuse by this administration.”

GNP Representative Lee Ju-young, head of the budget committee, pleaded to the opposition lawmakers to allow deliberation on the budget so that they will not be embarrassed with another delay, but the Democrats raised their voices in opposition. “In the United States, President Richard Nixon stepped down after the Watergate scandal,” said DP Representative Hong Young-pyo. “If it is true that the Blue House had been directly involved in the power abuse scandal, it is a matter of presidential impeachment.”

As the Grand Nationals yelled at the Democrats, the standoff continued into the afternoon with no budget deliberation taking place.

The delay in the budget deliberation has become a tradition of sorts in the National Assembly. Since 1990, lawmakers have met the deadline to pass the budget only six times. Since 2000, not a single budget bill has been passed before the constitutional deadline.