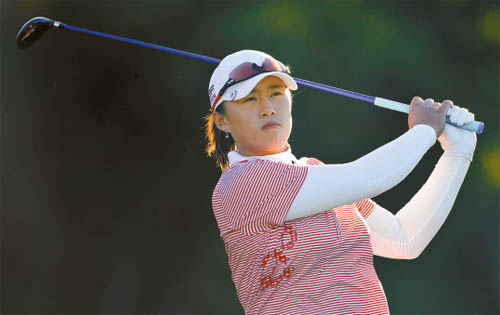 Amy Yang tees off on the 15th hole during the third round of the LPGA Tour Championship in Orlando, Fla., on Dec. 4. [REUTERS/YONHAP]


ORLANDO, Fla. - Korea’s Amy Yang birdied the last two holes on Saturday for a 1-over par 73 that allowed her to cling to a one-stroke lead after the third round of the LPGA Tour Championship.

Yang, seeking her first LPGA triumph and first of any kind since she won the 2006 Australian Ladies Masters at age 16, stood at 6-under par 210 after 54 holes at the $1.5 million season-ending tournament.

Sweden’s Maria Hjorth fired a 71 to stand one stroke back entering the final round with American Cristie Kerr and South Korea’s Lee Seon-hwa sharing third at 213, one stroke ahead of American Laura Diaz. No one else was under par.

“If you are under par, I still think there’s a chance,” Hjorth said.

A double-bogey seven on the second hole and a bogey on the seventh left Yang reeling early, and after a birdie on the par-three 12th, she stumbled with a bogey on the 15th.

“I couldn’t really control my game. I was just off somewhere,” Yang said.

But she answered with birdies on the 17th and 18th to move one stroke ahead of Hjorth.

“I think I will be, I hope, less nervous tomorrow,” Yang said. “If I get a win it would be great.”

After a cut to the low 70 and ties Saturday morning, when the darkness-halted second round was concluded, the field was trimmed to the low 30 and ties after 54 holes, ending the hopes of season-ending awards for some players.

Japan’s Ai Miyazato fired a 71 but missed the cut by a stroke, dooming her bid for LPGA Player of the Year and the year-end top ranking. World No. 1 Shin Ji-yai, who made the morning cut, fired a 76 to stand on 228 and also missed out on the top 30, assuring Korean Choi Na-yeon of the LPGA season money title. Shin had been the only foe within reach of Choi’s $1.81 million given the event’s $225,000 top prize.

“Any category, if I’m the top one, I would be very happy and very honored, so I’m very happy right now,” Choi said. “It was better than my goal for this year.”

Choi shot a 73 on Saturday to enter the final round seven strokes off the pace. Four players in Sunday’s final round have a chance to topple Shin from the season-ending world No. 1 ranking - Choi, Kerr, Norway’s Suzann Pettersen and Taiwan’s Yani Tseng, who leads the fight for Player of the Year honors.

With points awarded only to top-10 finishers, Tseng enters the final day on top in the Player of the Year race with 188, with Choi at 174 and Kerr at 173. But Tseng only made the cut on the number while Kerr and Choi were in contention for the winner’s total of 30 points.

“I think Cristie will win the tournament to take this title,” Tseng said.

If Kerr does, she will become the first American to capture LPGA Player of the Year honors since Beth Daniel in 1994. But Kerr must win to pass Tseng.

“I have to put the awards and all of those different things away and I just have to win,” Kerr said. AFP