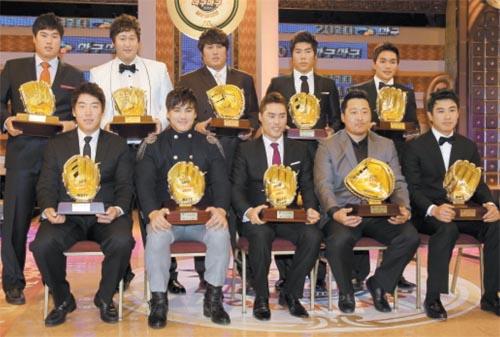 The 2010 KBO Golden Glove winners pose for the camera at the Coex Convention Center Auditorium on Saturday. By Kim Hyun-dong


Lotte Giants’ designated hitter Hong Sung-heun proved to be the most popular pick at the 2010 KBO Golden Glove Awards at Coex in southern Seoul on Saturday, earning the most votes overall and edging his teammate and the 2010 season’s Most Valuable Player third baseman Lee Dae-ho.

Lee had the most dominating season in the history of the KBO by topping seven of eight major offensive categories and winning the season’s MVP award.

But it was Hong who received the most votes from sportswriters and broadcasters, dominating the designated hitter category with 344 of 373 total votes to earn top player honors for his position. Park Seok-min of the Samsung Lions came in a distant second with 13 votes.

Having won the Golden Glove - an annual award given to the top player in each position - as a catcher with the Doosan Bears in 2001 and 2004, Hong earned the most votes among the 11 winners on Saturday. His 344 votes was one more than the 343 votes his teammate Lee Dae-ho received as this season’s top third baseman. 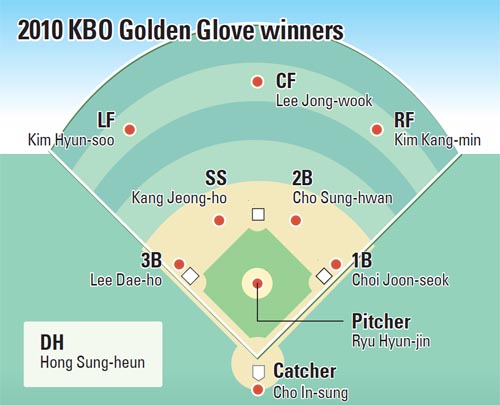 Hong was on pace to top the league in RBI this year but was hit on the hand by a pitch from Kia Tigers starter Yoon Seok-min in mid-August, sidelining the veteran for about a month.

“I went through some ups and downs this year,” Hong said. “I’m looking forward to hitting over 30 home runs and more than 116 RBI next season.”

Hong is also one of the most popular personalities in the league. His All-Star game antics - he wore a faux beard at the 2010 All-Star game and a wig at last year’s game - have become an annual event for baseball fans.

“As long as we don’t cross the line, I think there is a need for players to attract more fans to games by providing something more than just the ability to play the game well,” said Hong.

Lotte and Doosan each had three Golden Glove winners while Samsung and Kia failed to produce any. Cho Sung-hwan of the Giants was the top second baseman of the season. Other winners include Doosan’s Choi Joon-seok at first base, Nexen’s Kang Jeong-ho at shortstop and Hanwha’s Ryu Hyun-jin at pitcher. Veteran catcher Cho In-seong of the LG Twins became the oldest first-time winner at the Golden Glove Awards.