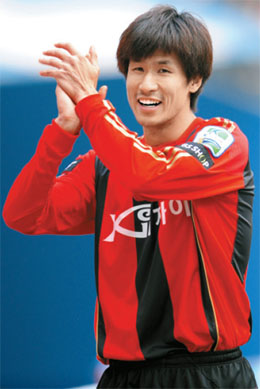 Coming off a career season with FC Seoul, forward Jung Jo-gook is set to join AJ Auxerre of the French Ligue 1.

According to reports released yesterday by Jissen, Jung’s agency, the forward agreed to terms with AJ Auxerre officials in France on Dec. 10. He was set to undergo a physical test yesterday and will sign the contract in January. Jung’s contract with FC Seoul is set to expire at the end of the year and the terms of agreement with AJ Auxerre were not disclosed.

The 26-year-old is coming off a career year in which he netted 13 goals for FC Seoul in its championship winning season. As a result, Jung was recently included on the 47-man preliminary roster for the 2011 Asian Cup by the national football team manager Cho Kwang-rae. Due to his obligations in France, Jung was not able to join the national team training camp, which started yesterday in Seogwipo, Jeju Island. Instead, Jung will return to Korea on tomorrow and will join the national team training camp on Thursday.

Jung was once considered a top flight prospect, playing on the U-17, U-20 and U-23 national teams. He also was on the reserve team of the 2002 World Cup squad that made a surprise run to the semifinals.

Upon graduating from Daeshin High School, Jung joined the Anyang Cheetahs in 2003 and scored 12 goals in his rookie season. Jung failed to live up to the hype after his impressive rookie season scoring 38 goals in the following five seasons (2004-09). Jung was able to attract the attention of the AJ Auxerre’s front office and the national team coaching staff with an impressive season this year.

Founded in 1906, AJ Auxerre won its lone league title in 1996. It placed third overall last season to qualify for the UEFA Champions League this year but failed to advance to the round of 16. AJ Auxerre has been struggling in this season’s Ligue 1 with the record of four wins, four losses and nine draws - good for 14th place.

“Even if a move can be deemed costly to our club, if it’s beneficial to the future of Korean football, we support them,” said Han Woon-soo, president of FC Seoul.

FC Seoul has supported the transfer of several of its players to European clubs in the past. Former national team forward and current national team assistant coach Seo Jeong-won joined Strasbourg of the French Ligue 1 in 1997, and Lee Young-pyo, currently with Al-Hilal of the Saudi Premier League, was allowed to join PSV Eindhoven of the Dutch Eredivisie in 2003. At the time, Lee was signed to a six-month loan and eventually earned a complete transfer. He would go on to play for Tottenham of the English Premier League and Borussia Dortmund of the German Bundesliga. Since then, Park Chu-young (AS Monoco) in 2008 and Lee Chung-yong (Bolton) and Ki Sung-yueng (FC Celtic) in 2009 were also allowed to transfer to European clubs. FC Seoul reportedly earned a total of 11 billion won ($9.6 million) off the three transfers.

Meanwhile, FC Seoul failed to come to terms with its manager Nelo Vingada. FC Seoul signed a one-year deal with a club option for another season last December.