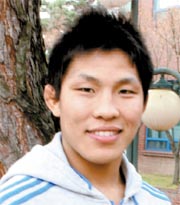 The national judo team ended the year on a high note with a strong performance at the 2010 Guangzhou Asian Games last month - but there is no one happier on the squad than Kim Jae-bum.

The 25-year-old judoka, who competes in the under-81 kilogram division, had been in the shadow of more prominent members of the national team like Wang Ki-chun (under-73 kg) and Choi Min-ho (under-60 kg), but he has emerged as a star in his own right this year.

Despite being the top-ranked athlete in his weight class, Kim had come up short in major international competitions in the past. He placed second at the 2008 Beijing Summer Olympics and settled for a bronze medal at the 2009 World Judo Championships in Rotterdam, the Netherlands.

The 2010 season was a completely different experience for Kim. He won a gold medal at the World Championships in Tokyo in September and another gold medal at the Asian Games in Guangzhou in November. Kim is now the only member of the Korean squad to have won gold medals in both events - helping contribute to Korea’s continued success in Judo.

In fact, Kim achieved the impressive feat of placing first in all tournaments he entered this year. He won the World Masters in Suwon in January; the Grand Prix in Dusseldorf, Germany in February; the Prague World Cup in the Czech Republic in February; and the World Cup in Ulaanbaatar, Mongolia in July.

Kim has always been one of the top-conditioned athletes on the national squad, but is said to have lacked finishing moves in crucial situations. Elite judokas master several throws with which they can defeat opponents on ippon - a final decisive point issued by a referee that ends a match.

“It’s an area in which Kim Jae-bum needs to improve if he is to win in a major international event like the Olympics,” former gold-medalist Lee Won-hee, who trained with Kim and Wang in the under-73 kilogram division, had said in the past.

To make up for his shortcomings until this year, Kim was intelligent and aggressive in matches.

“It’s always nice to see judokas connect on a spectacular throw to win a match on ippon,” said Kim last week. “But that’s all meaningless if you end up losing a match while attempting such moves. I will focus on competing for wins.”

That does not mean Kim is not keen on winning matches on highlight-reel throws. In fact, his ippon wins have increased a lot this year compared to the past. “I’ve been trying to improve my weaknesses by [studying] video of nice throws from competitions,” said Kim.

Having completed the most successful season of his career, Kim is already looking ahead to the 2012 London Olympics. He can achieve a grand slam by adding an Olympic gold medal to his collection.

“Failing to win a gold medal at the Beijing Summer Games actually served as a motivational factor for me,” said Kim.

“I’m now ready to start on a new mission towards winning a gold medal in London.”