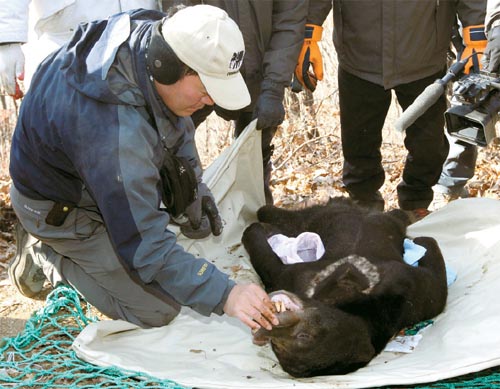 Ggoma, the six-year-old Malaysian bear, which escaped from Seoul Zoo on Dec. 9, was captured yesterday on Mount Cheonggye. [YONHAP]


Ggoma is back home, whether he likes it or not.

The six-year-old Malaysian bear, which escaped from Seoul Zoo nine days ago while his cage was being cleaned, was nabbed yesterday.

Ggoma was found on nearby Mount Cheonggye, zoo officials said, and he seemed no worse for the wear.

Ggoma is in good health, the zoo official said, but just to be sure, he will be examined at an animal hospital at the zoo, which is located in Gwacheon, 18 kilometers (11 miles) south of the capital.

And these, according to officials, are the bear facts.

Ggoma, who is 1.2-meters (4-feet) tall and weighs 30 kilograms (66 pounds), was going to be moved on Dec. 6 to another cage so that his cage could be cleaned. Ggoma, apparently, had other ideas.

While no one was watching, Ggoma very skillfully used his forefeet to unlock the T-shaped lock and exited the cage, stage left or right - no one knows for certain.

The Seoul Metropolitan Government went into action. Hikers were banned from the mountain, and about 300 police officers and firefighters and 120 zoo officials were called in for the search.

Honey, wine and sardines were placed strategically to attract the honey bear.

In the end, it was the trap that did him in.