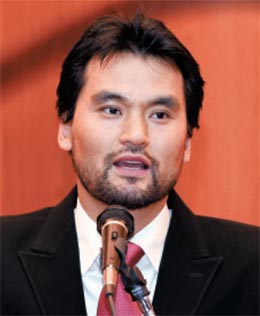 Korean pitcher Park Chan-ho will join the Orix Buffaloes in the top Japanese league next year after playing in Major League Baseball for 17 seasons, his agency announced yesterday.

The 37-year-old right-hander has signed a one-year deal with the Osaka-based Buffaloes of Nippon Professional Baseball, his management company - Team 61 - said.

Financial terms of the deal were not immediately disclosed. Park will discuss his future in more detail in a press conference scheduled for today, the agency said.

In 1994, Park joined the Los Angeles Dodgers to become the first Korean to play in the majors.

He holds the record for the most victories in the league by an Asian pitcher with 124. Park has pitched for seven clubs, most recently the New York Yankees and the Pittsburgh Pirates in 2010. Park went 124-98 with an earned run average of 4.36 in 476 appearances.

On the Buffaloes team, Park will be teammates with Korean first-baseman Lee Seung-yeop.

Lee reached a two-year deal earlier this month after spending five seasons with the Yomiuri Giants, also in the NPB. Pitcher Koo Dae-sung played for Orix in the past. The team’s other notable former players include Ichiro Suzuki and So Taguchi.

Park and Lee have never played together for the same club in their careers.

Park is considered one of the country’s greatest pitchers ever. Lee holds the record for belting the most home runs in a Korea Baseball Organization season with 56, set in 2003 when he played for the Samsung Lions. He won five most valuable player awards in Korea.

Park became a free agent after the season but didn’t generate much interest in the market.

In a press conference late last month, Park said about four MLB clubs showed varying degrees of interest in him, but added he hadn’t heard anything specific.

Park said at the time that his priority was to remain in the majors, but he was also open to possibilities of playing in Korea or in Japan.

Park went to the Dodgers after playing two seasons for Hanyang University in Seoul and has never played professionally in Korea.

He is the first Korean player to move from the majors to the NPB.

Park’s departure leaves Choo Shin-soo, outfielder for the Cleveland Indians, as the only Korean currently playing in the majors.