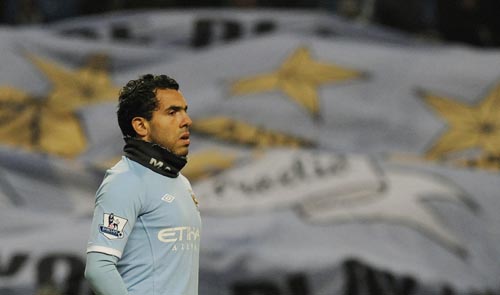 
MANCHESTER, England - Manchester City striker Carlos Tevez completed a remarkable flip-flop on Monday when he committed his future to the club a week after handing in a written transfer request.

Shortly after City announced he would be staying, Tevez captained the side against Everton at Eastlands, but could not inspire it to the victory that would have taken the team to the top of the table. He battled away up front with little impact as City suffered a 2-1 defeat that left it in third place, having missed the chance to top the table at Christmas for the first time since 1929.

David Moyes’ side, which had not won in seven matches, took control within the opening 20 minutes through Tim Cahill’s early effort and a fine strike from Leighton Baines. After Everton’s Victor Anichebe was sent off for a second yellow card just before the hour, City halved the deficit through Phil Jagielka’s own goal.

Despite constant pressure, City could not find an equalizer and missed out on the chance to move to the top of the table at Christmas for the first time in 81 years as their seven-match unbeaten run came to an end. The team also had defender Kolo Toure dismissed in stoppage time to complete a miserable evening that ruined Tevez’s return to action just hours after he decided to withdraw a transfer request.

In many ways, it was the same old City which has a history of faltering when the main chance comes its way. It blew its opportunity of a place in the Champions League when they lost to Tottenham Hotspur in its last home match last season. It also suffered telling losses to Manchester United in the League and League Cup by conceding late goals last season, and on Monday they squandered another good chance for an important victory.

Tevez was closely marshaled by his former City teammate Sylvain Distin, a tower in the Everton defense, and his best chance came in stoppage time when his powerful shot was parried away by Everton goalkeeper Tim Howard.

“I think we resolved the situation and we are very happy for this. It is good news,” he said.

Earlier, City said in a statement on their Web site (www.mcfc.co.uk) that the Argentine international had withdrawn his demand - a move guaranteed to delight the club’s fans, who were rather muted in their approach to him during the game, neither booing or cheering him.

The 26-year-old asked to leave last week, saying his relationship with certain officials at Eastlands had broken down and was “beyond repair.”

But City said “clear the air” talks had been held with Tevez, who had expressed his “absolute commitment” to the club. He was named as captain against Everton in his first match since last week’s upheaval.

“Carlos is a world-class player whose contribution since he joined the club has been invaluable,” Mancini said in the statement.

“I am pleased that we are now able to focus on pure football matters and to be able to look forward to Carlos continuing to play a significant role in the club’s progress.”

Tevez, who joined City from arch-rival Manchester United 18 months ago, has netted 33 goals in 50 league appearances for the Blues and is its top scorer this season with 10 goals. He still has three-and-a-half years left on his five-year contract, but has repeatedly hinted he is unhappy with the club, homesick for his young family in Argentina and disillusioned with football in general.

City’s owner, billionaire Sheikh Mansour bin Zayed Al Nahyan of Abu Dhabi, has invested more than 800 million pounds ($1.24 billion) in new players in a bid to bring success and Tevez is an integral part of those plans. Monday’s match was his first since City beat the Bolton Wanderers 1-0 on Dec. 4 when he scored the only goal. He missed last week’s 1-1 draw with Juventus.