Lindsay Lohan being investigated for battery

Lindsay Lohan being investigated for battery 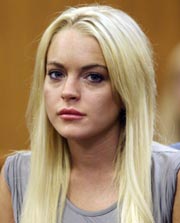 LOS ANGELES - Even in rehab, trouble seems to find Lindsay Lohan. The actress whose career has stumbled in recent years from drug and alcohol abuse is now under investigation for the misdemeanor crime of battery, an official in Riverside County, California, said on Tuesday. The alleged battery took place at the Betty Ford Center, the rehabilitation facility where Lohan is currently residing in Rancho Mirage, Calif., about 120 miles east of Los Angeles.

“The victim desires prosecution,” Valenzuela said, but she added that detectives have not yet completed their investigation.