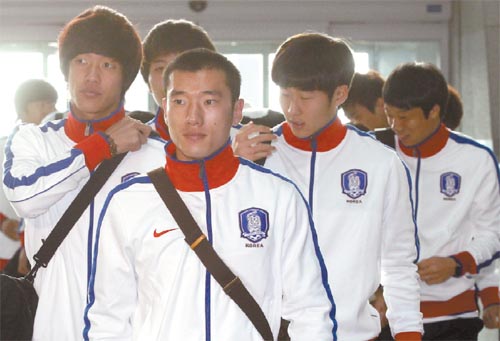 Choi Hyo-jin and the national football team arrive at Incheon International Airport for a flight to Abu Dhabi, U.A.E., yesterday. The national team will hold an overseas training camp in Abu Dhabi in preparation for the 2011 Asian Cup, which takes place in Qatar from Jan. 7 to 29. [YONHAP]


The national football team was dealt a tough blow over the Christmas weekend when its star forward Park Chu-young was diagnosed with a knee injury.

According to a statement released by the Korea Football Association yesterday, the 25-year-old damaged the cartilage in his right knee, making him unavailable for the 2011 Asian Cup in Qatar. Park reportedly felt a pop in that knee when his AS Monaco teammates piled on top of him to celebrate his winning goal in the dying minutes of the French Ligue 1 match against Sochaux on Dec. 23.

Park said he felt stiffness in his knee leading up to the game against Sochaux and, when the pain did not subside, had an MRI on Christmas Eve at United Hospital in Dogok-dong, southern Seoul. Park is expected to rest in Korea and return to France on Jan. 1 or 2.

“We were able to pinpoint Park’s injury by comparing the MRI test results from two years ago to the ones we got on Friday,” said Song Joon-seob, United Hospital director. “Park said he felt a pop in his right knee as the weight of his teammates pressed down on his knee. AS Monaco will have to decide on the rehabilitation schedule but he will need at least four weeks to recover from this injury.”

With its best scorer absent from the Asian Cup, national team manager Cho Kwang-rae opted to replace Park with defender Hong Jeong-ho of Jeju United in the final 23-man roster.

Cho had been planning to use either Ji Dong-won of the Chunnam Dragons or Yoo Byung-soo of Incheon United instead of Park as his starting forwards at the Asian Cup.

Cho also has Kim Shin-wook and Son Heung-min at his disposal but all of the forwards on the current roster are young and lack experience on the international stage. This has forced Cho to replace Park in the forward slot with proven veteran midfielder and national team captain Park Ji-sung.

“We will stick with the formation we had been working with in training and we will insert Park Ji-sung in Park Chu-young’s place at the Asian Cup,” Cho said at Incheon International Airport prior to departing for overseas training camp in Abu Dhabi, U.A.E., yesterday. “We will continue to look ahead as we prepare for the tournament. If our players stick together, we can net great results. I’m also considering [giving] Kim Bo-kyung [playing time] at forward.”

Park Ji-sung usually plays left wing but Cho put him in the attacking midfield position in past international friendly matches.

Park’s new role will require him to play the secondary forward or withdrawn forward position behind striker Ji Dong-won on the field. Ji will play up front with Park the next attacker in line.

Park has also had to deal with his own right-knee problems and told the English press on Dec. 25 that he will make a decision on his future with the national team after the Asian Cup next month.

His father had told reporters after a friendly match between the national football team and Myongji University on Dec. 16 that Park would retire from the national team after the Asian Cup because of his right knee, which has been operated on twice (2003 and 2007) and is prone to swelling after long flights.