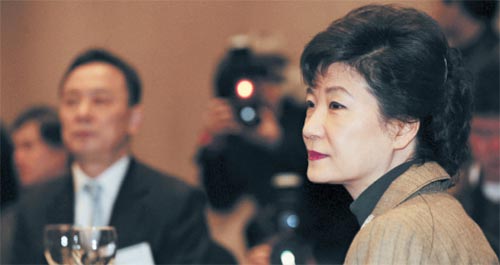 Park Geun-hye at the opening ceremony of her think tank, the National Future Institute, at COEX, southern Seoul, yesterday. [NEWSIS]


Park Geun-hye, former chairwoman of the ruling Grand National Party and potential presidential candidate in 2012, opened a policy think tank with political supporters yesterday, which some observers view as a pre-campaign move.

“[Korea] now stands at the crossroads of an era of new national development,” Park said at the think tank’s launch ceremony at COEX in southern Seoul. “This is the most critical time ever and the future of the Republic of Korea will change depending on how we deal with these times.”

Park, a daughter of former President Park Chung Hee, remains a strong presidential candidate for the GNP even though she was defeated by President Lee Myung-bak in their party’s primary for the presidential nomination in 2007.

Many older, conservative Koreans believe Park resembles her father, who engineered Korea’s economic development in the 1970s and revived South Korea after the Korean War (1950-1953). Some also believe that she will bring another chapter of the “Miracle on the Han River” to Korea.

Park said yesterday that Korea managed to get where it is today after undergoing so many ups and downs in the past and stressed that “now is the time that we desperately need participation and interest from distinguished experts for national development.”

“Countless hurdles lie ahead of us,” she told the assembled crowd. “But I believe, because you are here, we will be able to overcome all the hardships and achieve the great task of transforming Korea into a true developed nation.”

Observers said Park’s think tank, tentatively named the National Future Institute, will play a role in the next presidential campaign.

The National Future Institute consists of some 80 experts. Among the members are Sogang University economics professor Kim Kwang-doo, former presidential secretary for foreign and security policy, Yun Byung-se, and GNP Representative Lee Hahn-koo. Lee is the only incumbent lawmaker involved with the think tank.

Kim, who advised Park on economic policies for her 2007 presidential run, will head the think tank. He pledged yesterday to make it “Korea’s Brookings Institution,” a renowned policy think tank in Washington.

After her defeat in the 2007 GNP presidential primary, Park has held biweekly policy meetings with five professors - Kim is one of them - and they all joined the think tank, as well.