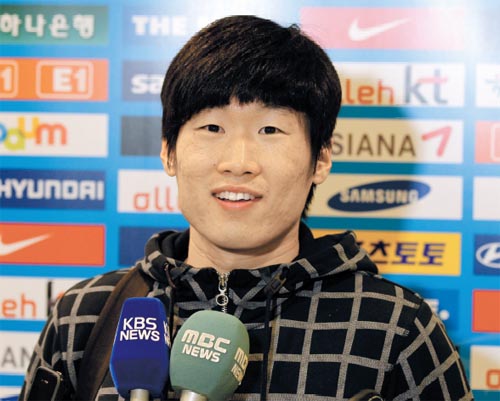 Park’s father said to the media after a national team friendly match on Dec. 16 that Park intends to retire from the national team at the end of the 2011 AFC Asian Cup in Qatar next month. He had explained in a recent interview with the JoongAng Ilbo that his son’s career could be cut short if he continues to play for the national team because of his oft-injured right knee.

Park Ji-sung spoke with the JoongAng Ilbo yesterday about his retirement, Park Chu-young’s injury and Son Heung-min, his 18-year-old roommate at training camp.


Q. There’s strong public interest in Korea about your possible retirement from the national team. Can you elaborate?

A. I can’t talk about it at the moment. I think I will be able to talk about it in detail at the end of the Asian Cup tournament.

With your father deciding to speak to the media about your retirement, do you think it could be a source of distraction for the team as it prepares for the tournament?

The results will speak for themselves. If we do not fare well in the tournament, I will deserve to hear such criticism. On the other hand, there won’t be a problem if we play well. That’s one of the reasons why I need to play hard.

Are you just waiting for the right time to make an official announcement on your retirement if it has already been decided, or can you change your mind?

What I think is important, but I also need to discuss the matter with Korea Football Association officials. I need to take such matters into consideration.

I don’t know exactly when, but they want to meet me in person and discuss the matter. I think I will speak with some of the senior members of the KFA, most likely leading up to the Asian Cup.

Your father mentioned recently that a medical test on your right knee this year revealed that you have roughly five years remaining in your career. Is that true?

That’s not true. My right knee is in good shape at the moment. It will not cause problems for me as a football player. Things can change depending on how I take care of my knee.

What do you think about Park Chu-young’s injury?

(It is) a tough situation. Park is a very important player for the national team. Having said that, there are other talented players on the squad and they will have the opportunity to emerge as key players.

It will be a great opportunity for them to develop their game further. We need to show that we have depth on our national roster.

How do you feel about being roommates with first-time national team selection Son Heung-min of Hamburg SV?

I heard Son is a talented player who is rated highly among young players in Europe. He has the skills and experience with the national team will help him become a better player. I want to provide a lot of help and advice so that he can adjust to being a member of the national team.

Manager Cho Kwang-rae said he will shift you from your usual midfield position to secondary forward in place of the injured Park Chu-young. Are you comfortable with the switch?

I will talk about this with the manager, but there won’t be a huge problem with the positional shift. I’ve played the position before.

You’ve mentioned on several occasions the importance of being crowned the best national squad on the continent by winning the Asian Cup. What does this Asian Cup mean to you?

Aside from any personal goals, winning the Asian Cup will be a big achievement in Korean football history.

Korea has not won the tournament in 51 years, and if we are to stake our claim as the best team in Asia, we need to win this Asian Cup.