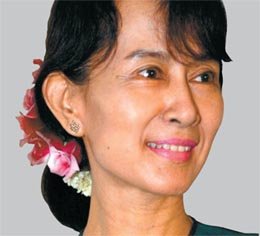 Aung San Suu Kyi, the leader of Myanmar’s democracy movement (in the country formerly called Burma), was released from house arrest in November after more than 15 years. After her National League for Democracy won general elections in 1990, the military junta rejected the results and confined Suu Kyi for many years. In this interview, the Nobel Peace laureate talks about her willingness to cooperate with the junta, her eagerness to get an e-mail account and her plans for Myanmar’s future.

Bernard Krisher, publisher of The Cambodia Daily and the Burma Daily, first interviewed Suu Kyi in 2000 in Yangon, formerly Rangoon. This month, Krisher conducted a follow-up phone interview with her.


Q. Now that you have been released, are you willing to cooperate with the regime?

A. I think I’ve always said I was willing to cooperate with the regime. I don’t think this is something new.

You won the election in 1990 and the regime did not allow you to take power, and then you were under house arrest and confinement for many years. Now that you are free, how do you feel? What should be your relationship to the junta now?

Our relationship to the junta has always been based on what we can best do for the country. That is how we decide what our relationship with the junta should be and it doesn’t make any difference how long they kept me under detention. These personal considerations don’t come into the picture at all.

What you would like to do in the future? What are you plans, what is your agenda?

Of course we have an agenda but the most important thing at the moment is for the whole world to understand that Burma needs a process of democratization.

When I met you in 2000, I asked how can you survive this? You said through humor. After all that has happened, do you still feel that humor is the best way to survive?

Humor is one of the best ingredients of survival. We have a lot of it around in the National League for Democracy and I don’t think we could have survived without it, considering that so many of us have been in and out of prison so frequently. When we sit around and talk and do our work there is a lot of laughter. It is part of our survival apparatus.

Are you able to use e-mail now?

I don’t have e-mail yet. We just had the telephone line in the NLD office reconnected after eight years. We’ll have to wait a little longer before we graduate to the e-mail stage.

I only used a cell phone for the first time after I was released. I had difficulty coping with it because it seemed so small and insubstantial.

There have been leaks of diplomatic cables indicating that the U.S. government believes that the Burmese regime is pursuing a nuclear weapons program with North Korea’s involvement. Are the people of Burma aware of this and what is your opinion?

I am not aware of this in any detail but I have heard about it on the radio.

What is the best way for foreign governments or aid groups to help Burma?

The best way to help Burma is to empower the people of Burma, to help us have enough self-confidence to obtain what we want for ourselves. For the moment, our people are frightened and lack confidence they have any power. The best way people can help us is to encourage us to help ourselves.

As you told me the last time: “To teach them how to fish rather than giving them fish”?

Do you intend to run for office in the next election?

It’s too early to reply because it depends on the conditions under which the next elections are held. We can’t predict what will happen in the next five years.


By Bernard Krisher, Special to GlobalPost [The Global Post]