Korea faces its first test ahead of Asian Cup

Korea faces its first test ahead of Asian Cup

Park Ji-sung, center, takes part in a drill with Kim Bo-kyung in a training session in Abu Dhabi, U.A.E., yesterday. The Korean national team plays Syria tonight at 7 p.m. in a warm-up match ahead of the Asian Cup in Qatar, which from Jan. 7 to Jan. 29. By Lim Hyun-dong


National football team manager Cho Kwang-rae will get a chance to see how his version of the Taegeuk Warriors stacks up before the Asian Cup when it takes on Syria in an international friendly tonight in the U.A.E.

With the national team holding an overseas training camp in Abu Dhabi, Cho has made two notable changes in the lineup. Captain Park Ji-sung was shifted from his usual left-wing position to secondary forward and versatile defender Lee Yong-rae has been slotted in the defensive midfield position opposite Ki Sung-yeung.

“Ji-sung is the type of player who can play up to his given role, no matter where he plays on the field,” said Cho. “We can slot him in at the center midfield position and it won’t disrupt the flow of the team. We expect to play him the entire 90 minutes.”

Kim Bo-kyung will play left wing with Lee Chung-yong on the right.

Lee Yong-rae, the 24-year-old Suwon Bluewings defensive midfielder, was considered a surprise selection by many when the final 23-man roster was announced on Christmas Eve. The manager selected the natural defensive midfielder for his versatility and as a backup for veteran left fullback Lee Young-pyo.

“Lee is a solid defensive player who is technically sound with a good shot,” said Cho. “He also has the ability to link the defense and the midfield.” 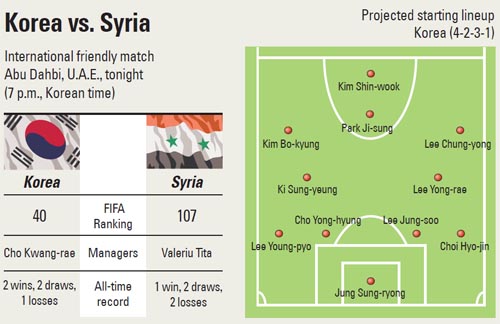 The defensive unit will remain intact for tonight’s friendly match except for Cha. The physical right fullback, who plays for Celtic FC with Ki, is experiencing slight pain in his thigh, but is expected to be ready for the first Asian Cup match. Choi Hyo-jin will take his place in the starting lineup tonight.

At the forward position, Cho was said to have considered Kim Shin-wook and Ji Dong-won, but it has been reported that he is leaning toward Kim. Kim, who is listed at 196 centimeters (6 feet 4 inches) and 93 kilograms (205 pounds), is considered more of an imposing threat in the penalty box for opposing teams.

“Kim Shin-wook’s flaw is that he lacks the agility and flash associated with smaller forwards,” Cho said. “But he’s a regular starter for Ulsan Hyundai and is a viable option as a starter.”

Ranked 109th in the world by FIFA, Syria is significantly lower on the list than Korea, at No. 40. The Taegeuk Warriors hold an all-time record of two wins, two draws and one loss against Syria.

The Syrians are managed by Valeriu Tita of Romania in their first Asian Cup in 15 years.

The most dangerous player on the team is Mohamed Al Zeno of Al-Karamah Sporting Club, based in the Syrian city of Homs. The 27-year-old has 14 goals in 36 international games. Forward Senharib Malki of the Belgian Sporting Lokeren OVL and midfielder Louay Chanko of the Danish Aalborg BK are the other star players on the team.

The Korean national team will play its final friendly against Al Jazira (Abu Dhabi) of the U.A.E. Football League on Jan. 4 before departing for Doha, Qatar to compete in the 2011 Asian Cup.

Managed by Abel Braga of Brazil, Al Jazira finished second in the UFL this year. The venue for the friendly game is yet to be determined.