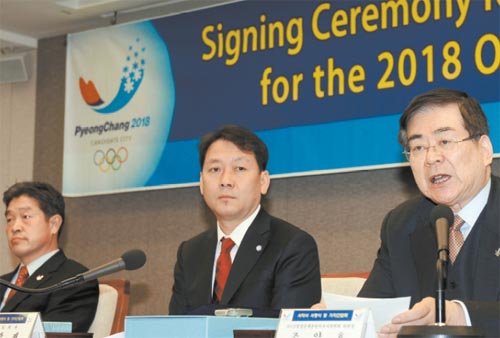 
After filling out its final bid papers, the Pyeongchang bid committee is ready for the final phase of the 2018 Winter Olympics vetting process. The committee announced at a press conference yesterday that it had completed its final candidature file.

The file contains answers to 261 questions from the International Olympic Committee on 17 categories such as Pyeongchang’s vision, venues, finance, transportation, security and accommodations. Members of the bid committee will travel to IOC headquarters in Lausanne, Switzerland to submit the file on Tuesday.

“We had experts from various fields participate on the final candidature file in order to prepare the best possible bid,” said Cho Yang-ho, the chairman of the bid committee. “We will try our best to win over IOC members next month at the inspection and international competitions, and by showcasing the progress Pyeongchang has made.”

Up next for Pyeongchang is an on-site inspection by IOC delegates to be held between Feb. 14 and 20.

In addition, the bid committee will have the opportunity to showcase its venues when Pyeongchang hosts international events this month and in February.

Pyeonchang, located about two and a half hours away from Seoul in Gangwon, is bidding for the Winter Games for the third consecutive time after losing out to to Vancouver, Canada for the 2010 Games and Sochi, Russia for the 2014 Games. Pyeongchang is up against Munich and Annecy, France for the 2018 bid.

Japan is the only Asian country to have held the Winter Olympics, with Sapporo hosting in 1972 and Nagano in 1998.

The host city for the 2018 Winter Games will be decided at an IOC general meeting in Durban, South Africa on July 6.