Union asked to cancel Jeonju rally due to FMD

Union asked to cancel Jeonju rally due to FMD 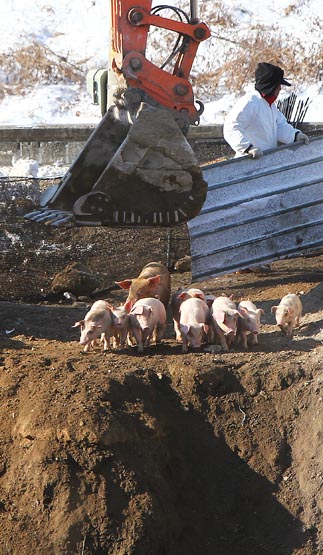 Pigs about to be buried in Dongducheon, Gyeonggi, yesterday to prevent the further spread of the deadly foot-and-mouth disease (FMD). Health authorities say all drugs used to slaughter livestock ran out last month, so they were forced to bury the pigs alive. [YONHAP]

The government and farmers are calling on the Korean Confederation of Trade Union to cancel a rally planned on Saturday in Jeonju Sports Complex, North Jeolla, fearing the 5,000 participants will bring foot-and-mouth disease (FMD) with them to the virus-free city.

The union, however, is saying the rally will go on.

Health authorities said the virus, which is fatal to livestock, has swept through most of the country, but not North and South Jeolla, South Gyeongsang and Jeju Island.

The liberal union is holding the rally, with members attending from around the country, to support bus drivers in North and South Jeolla who have been on strike against bus companies for the past month.

Bahk Jae-wan, minister of Employment and Labor, said at a press conference yesterday, “Due to the massive rally planned by the union, the FMD could spread in virus-free North Jeolla. While people all over the country are struggling to block the disease, it is not right to hold the rally where workers nationwide attend.”

Health authorities in North Jeolla on Wednesday voiced the same concern. “All the efforts to battle the disease until now could be meaningless because of the rally and we ask the union to cancel or postpone the rally,” the authorities said.

Seven associations of stock farmers held a press conference yesterday at Jeonju City Hall, asking for the union to withdraw the rally.

“When FMD broke out in Chungcheong areas [which neighbor North Jeolla], stock farmers [in Jeolla] felt like they are standing on ice,” the association said. “With our tears, we appeal for the union to postpone the rally if they understand farmers.”

“If the union pushes forward the rally and finally the disease breaks out, we will ask the union to take all responsibility for the outbreak,” the association said. “But we also strongly ask bus companies to be eager [to go to] the negotiating table with workers to restart bus operations in the city as soon as possible.”

The labor union told reporters Tuesday that the rally will proceed as planned. The union said its members have rarely had contact with farms so they pose no threat of introducing FMD during the rally. “As the rally has already been fixed, we will push ahead with it, but we will do our best to cooperate with blocking the virus,” the union said.

Health authorities say the virus can be transferred by people’s clothes, by cars and by air.