Three museums greet the Year of the Rabbit

Three museums greet the Year of the Rabbit 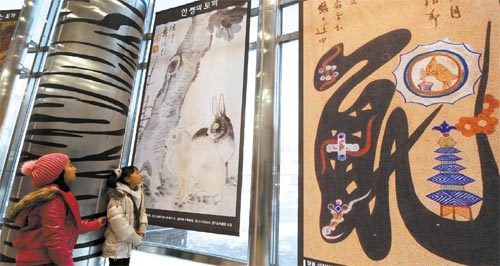 Two girls look at paintings on display at the museum. The painting on the right is of the Chinese letter “chi,” which means shame. The rabbit is inside the moon in the middle. [YONHAP]


To ring in the Year of the Rabbit, three major museums are holding exhibitions to introduce visitors to the history and mythology of the rabbit in Korean culture.

Rabbits play a major role in Korean parables, where they are often portrayed as witty animals who manage to escape life or death situations.

One well-known folktale is about a clever rabbit who saves her own life after she is captured by the king of the sea. According to the tale, the king, who is sick, believes that a rabbit’s liver will cure him of his illness and summons a turtle to bring a rabbit to him to cure his disease. The turtle tricks the rabbit into going under the sea, but when the rabbit figures out why she is there, she tricks the king into letting her go by telling him that she doesn’t normally carry her liver around with her and has to go back up to the surface to get it.

There is another tale in “Samguk Sagi” (“History of Three Kingdoms”) that describes how Silla Dynasty (57 B.C.-935 A.D.) scholar Kim Chun-chu saved his life using similar tactics. According to the story, when Kim was taken captive by Goguryeo he told the king that he could persuade the King of Silla to give Goguryeo some land but would need to go back to his country to negotiate the deal. It was, of course, a trick that enabled Kim to escape. 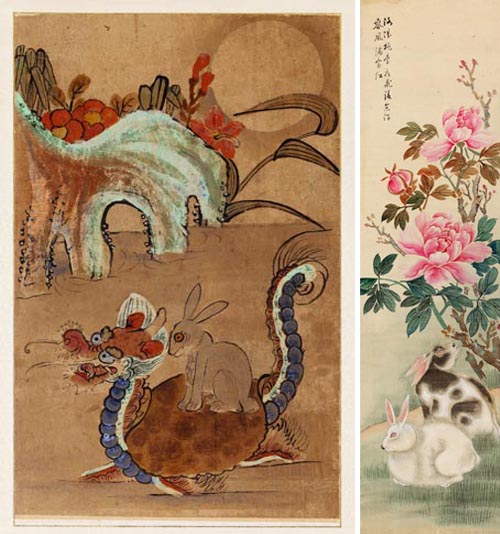 
These stories have been passed down through songs such as “Tokki Taryeong” and the pansori song “Sugungga” and through novels such as “Byeoljubujeon.”

“The Rabbit, An Animal of Wisdom,” an exhibition at the National Museum of Korea that runs until Feb. 27, aims to explain how ancient Koreans once thought of the rabbit.

One section shows the rabbit as the symbol of new beginnings and the sun. Rabbit figurines from this period are often shown facing eastward, as if greeting a new day while the sun rises.

Another section shows pieces related to the folktale of the rabbit who escaped from the king of the sea. The pieces on display are primarily writing supplies, including inkwells and inkstones. There are also incense burners and white porcelain dishes decorated with rabbits.

There are more rabbit tales and artifacts to be found at the National Folk Museum of Korea in Samcheong-dong, Seoul. In 1999, the previous Year of the Rabbit, the museum launched an annual exhibit featuring the year’s animal according to the Chinese zodiac. Thus, the exhibition series comes full circle this year and concludes with an exhibit called “The Folktales of the Rabbit,” which continues through Feb. 14. 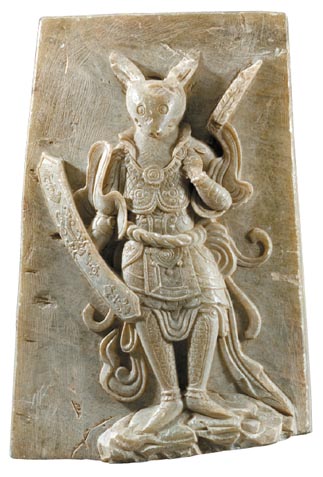 A rabbit figurine thought to be found in the tomb of United Silla General Kim Yu-shin. Provided by the National Museum of Korea

The exhibit features illustrations that were used in storybooks about rabbits, along with cultural artifacts featuring the rabbit.

In addition to the artwork on display, there are also performances and hands-on experiences. On Jan. 16, veterinarian Kim Deok-eun will tell stories about rabbits at 2 p.m.