More reports of FMD despite efforts to fight it

More reports of FMD despite efforts to fight it 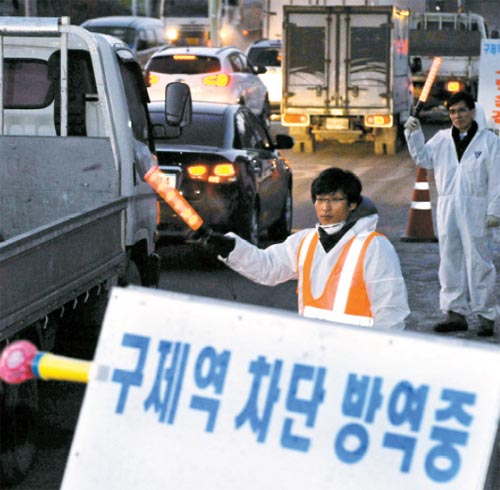 Officials disinfect vehicles at a checkpoint between Daejeon and North Chungcheong on Wednesday to stop the spread of foot-and-mouth disease. By Kim Seong-tae


Two additional cases of foot-and-mouth disease (FMD) were confirmed in the country’s central and southeastern regions yesterday, despite nationwide quarantine and vaccination efforts.

The additional cases in Chungju and Yeongyang, 147 kilometers (91 miles) and 330 kilometers from Seoul, respectively,bring the total number of confirmed FMD cases in the country to 118, the Ministry for Food, Agriculture, Forestry and Fisheries said.

Animals started showing symptoms in late November, and all 287 animals on the latest cattle farms identified have been ordered to be slaughtered, along with livestock within a 500-meter (1,640 feet) radius of each site to prevent the further spread of FMD, the ministry said.

The latest outbreak - the most severe in the country’s history - has spread through five provinces and the port city of Incheon.

FMD is highly contagious and affects all cloven-hoofed animals, such as cattle, pigs, deer, goats and buffalo.

It is classified as a “List A” disease by the Paris-based World Organization for Animal Health, although it is harmless to humans.

Korea was hit by the disease in 2000, 2002 and two more times early last year, with the latest outbreak is causing authorities to order the culling of more than 1.5 million animals so far.

Seoul announced Wednesday that it will start vaccinating all livestock across the country that could be exposed to the FMD virus.

Policy makers initially ordered limited vaccine use last month in order to make it easier for the country to regain its FMD-free status after the outbreak.

There are 3.4 million heads of cattle and around 10 million pigs in the country.