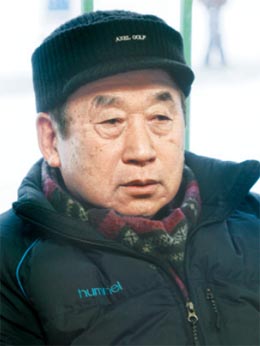 A 51-year Asian Cup drought for Korea might be impossible for some Korean football fans to explain, but for the surviving members of the 1960 Asian Cup winning team, it’s simple: it’s the curse of the fake gold medals.

It’s one theory on why Korea, which has consistently ranked among the top three Asian national teams in FIFA’s world rankings and competed in seven consecutive World Cup tournaments from 1986 to 2010, has not won an Asian Cup title in 51 years.

Park Kyung-hwa, 72, is one of the few surviving members of the 1960 Asian Cup squad.

At 21-years-old, he was the youngest member of the national football team at the 1960 Asian Cup, which was hosted by Korea.

Park is also famous for being a former women’s national team manager, who quickly put a women’s team together just three months before the 1990 Asian Games.

Korea beat Israel in the inaugural 1956 Asian Cup in Hong Kong and defeated Israel again in the finals in 1960, but has not won a title in the 12 subsequent Asian Cup tournaments.

Israel, before it started competing under the Union of European Football Associations, was a member of the Asian Football Confederation. It was the runner-up in the first two Asian Cup tourneys before winning the title on its home turf in 1964. Israeli national teams and club teams would continue to compete under the AFC until 1978, when a boycott by Arabic teams led Israel to compete against teams from Oceania while it was waiting for membership in UEFA, which it earned in 1990.

But Park has his own explanation for Korea’s Asian Cup title drought.

“When we won the title in 1960, the gold medals were fake,” said Park. “They were made out of metal and painted gold. Most of the members of that team have passed away and we’re suffering from their curse.”

Lee Eun-sung, 75, a starting defender on the 1960 squad and former manager of the Ajou University football program, shares Park’s theory.

“We all received what the organizers told us were gold medals but they began to rust soon after,” said Lee. “I think the tournament organizers at the time replaced the gold with metal. The members of the team were obviously angry about the incident. Everyone on the team tossed their medals out.

“The Korea Football Association offered to give us new medals after Korea’s successful run to the semifinals at the 2002 Korea-Japan World Cup but we have yet to receive any new medals.”

Park also pointed to another unfortunate incident that took place in the group match between Korea and Israel, which was held at Hyochang Stadium, in Yongsan District, central Seoul, on Oct. 17, 1960.

“Prior to the start of the group stage match against Israel, the stands in the north end of the stadium collapsed leading to numerous injuries,” said Park. “As the first international football tournament hosted by Korea, there was a great deal of interest from football fans in Korea. A total of 40,000 fans packed a stadium with a capacity of 20,000.”

According to a report in the Kyunghyang Shinmun the following day, the stands in the north end could not support the extra weight and collapsed. As a result, 19 people were injured, two critically and eight seriously.

“The organizers did a horrible job of controlling the crowd and I had to stop the game three times,” Yozo Yokoyama, the match’s Japanese referee, was quoted as saying in the Kyunghyang Shinmun report. “The organizers, who allowed fans to enter the stadium regardless of its capacity, are responsible for this incident.”

Aside from the unfortunate incidents at the 1960 Asian Cup, the Korea Football Association has not paid much attention to the AFC-sanctioned Asian Cup over the years, which is held concurrently with the World Cup.

The KFA has few records on the 1956 and 1960 Asian Cup tourneys and there is no information or artifacts on the two squads in the football museum in the basement of the KFA building.

The two title-winning squads are mentioned in a KFA timeline featuring 100 years of Korean football history, but the facts are said to be inaccurate.

“Players who didn’t even play on the teams were named on the KFA’s timeline,” said Lee.

Said one KFA official: “The winning team is allowed to hold on to the Asian Cup trophy for a year before returning it to the AFC. At the time, the Asian Cup lacked the publicity and respect that it does now.

“To my knowledge, that’s why there’s a lack of records on past Asian Cup teams.”