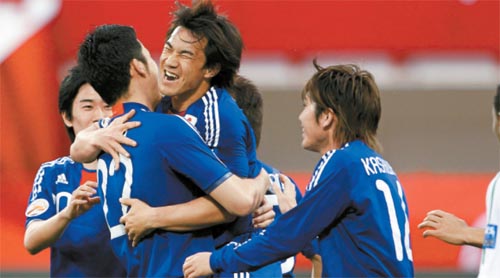 Ryoichi Maeda also struck twice as the Blue Samurai avenged their loss to the Saudis in the 2007 semifinals, which denied them a record third-straight continental title. Japan had needed just a point to qualify after a draw with Jordan and a 2-1 win over Syria. They now face hosts Qatar in the last eight.

The Saudis had already crashed out of contention - only the second time in Asian Cup history that they have not made it to the knockout stages. 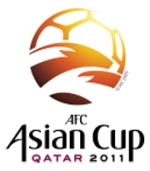 Saudi Arabia coach Nasser Al Johar, who had hoped his side would fight against their old rivals to restore some pride, was apologetic.

“We wished to present you a very beautiful match with Japan. But we haven’t performed in a way to redeem our national team in the entire tournament,” he said.

Ace striker Yasser al-Qahtani attempted the first Saudi shot in the second minute when he trapped a through pass and floated the ball wide. Shimizu S-Pulse striker Okazaki, filling in for CSKA Moscow’s Honda, missed a chance two minutes later when he narrowly failed to meet Maeda’s cross towards Saudi goalkeeper Waleed Abdullah.

But Okazaki, reportedly nearing a deal with Stuttgart, opened the scoring on eight minutes, trapping a long ball from Yasuhito Endo in the box, lifting the ball over Abdullah and slotting it into an open net. The 24-year-old, who scored the final goal in Japan’s 3-1 win over Denmark in the World Cup group stage, doubled the score in the 13th minute as he banged home a cross from Borussia Dortmund rookie Shinji Kagawa with a breath-taking diving header.

On facing Qatar next, Zaccheroni warned: “They have rebuilt themselves after losing their opener and are really pumped up.”