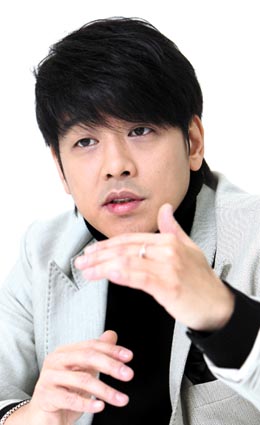 Ryu Shi-won has taken a personal interest in the search for a Japanese woman who disappeared after coming to Korea last year. By Kang Jun-hyun

When actor-singer Ryu Shi-won learned of the disappearance of Eriko Tanahashi, a Japanese woman who disappeared without a trace in Korea more than a year ago, he was as struck as if she were a member of his family.

“It didn’t make sense to me, so I couldn’t believe it,” he said. “I felt like her son and wanted to ask her how she had ended up in Gangneung alone.”

Since then, he has taken a personal interest in the search for Tanahashi, a fan of Ryu who came to Korea in December 2009 on one of many trips she took after she got caught up in the Korean Wave of cultural exports.

Tanahashi was last spotted eating dinner alone in a restaurant in Jumunjin, a coastal town in Gangneung, Gangwon, on Jan. 1, 2010. Police say they have no idea if Tanahashi, then 58-years-old, met an accident, was murdered or voluntarily disappeared.

He remembers meeting Tanahashi several times in both Korea and Japan over the years, including the last moment he shared with her. One winter day a year ago, Ryu was on his way home when he spotted Tanahashi with three other fans. He got out of his vehicle to greet them and Tanahashi gave Ryu a letter and a T-shirt. Before she left, he said he told her to take care in the cold and get home safely.

“She wasn’t an outrageous fan who would ask me for my autograph,” Ryu recalled. “She always approached me carefully, called me ‘Shi-won san’ [Japanese for ‘sir’ or ‘mister’] and would give me handmade presents.”

Since her disappearance, he has reached out to her family. When two of Tanahashi’s daughters visited Korea earlier this month to search for their mother they met with Ryu, who told them he would assist in the search.

He asked fans to help find her, saying, “Please find it in your hearts to sympathize with the family and help them find their missing loved one.”

He had his agency collect information on filming locations that Tanahashi might have visited with the hope that it would help her family find her.

But Tanahashi’s whereabouts are still a mystery. In the meantime, people have reported sightings and sent notes of consolation to the family.

“[Tanahashi] visited Korea because she likes Korea and Korean culture,” Ryu said. “I hope people will send their regards to her family so they know how much Koreans care.”