For students, winter is all about Nuptse coats

For students, winter is all about Nuptse coats 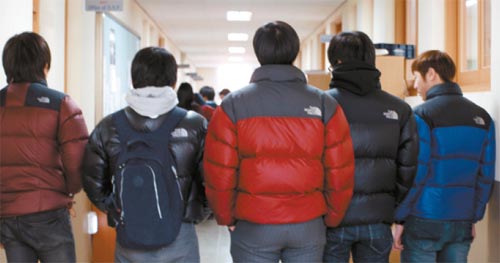 High school students wear variations of the North Face Nuptse jacket, which has become a fad in schools. By Kim Ye-hoon


Lee Sung-youn, a senior at Hanyoung Foreign Language High School, wakes up each day, puts on his North Face Nuptse jacket, and heads to school. In class, he’s joined by 12 other classmates wearing the same jacket, with variations in color.

“I think this jacket is simply awesome,” Lee said. “I can wear it on top of my uniform and still move comfortably. It’s really useful this cold winter because it prevents warmth from escaping. But above all, I think this jacket has a great design and that is why everyone wears it.”

Lee isn’t exaggerating. The puffy down jacket has seen such widespread popularity among teenagers in Korea that it’s become something of a secondary uniform. In one class at Hanyoung, 18 of the 37 students had the Nuptse jackets.

And recently, a picture of a high school classroom went viral on the Internet showing two rows of students in the same jackets snugly asleep with their heads on their desks.

The widespread popularity of outdoor wear - from young students to older hikers - has caused a big boom in the local market. Most outdoor-wear companies grew 20 percent or more in the past year.

But thanks in part to the teenage obsession for Nuptse jackets, North Face, the California-based outdoor products company, has seen remarkable growth here in the past decade, cementing its position as the No. 1 outdoor-wear brand and recording a profit of 500 billion won ($450 million) last year.

North Face’s success in Korea has left even the company scratching its head.

“We are never sure exactly why teenagers are so enthusiastic about our products because no one can specifically pinpoint the features that appeal to them and also because we never had a marketing plan that targeted teenagers,” said Jang Hee-su, public relations officer for North Face Korea.

“Brands such as Nautica, Kappa or Nike have all once been popular among teenagers. I believe that the trend just happens to be toward our products.”

But while most product brands see their popularity fluctuate, North Face has been able to sustain its popularity for more than a decade.

The Nuptse jacket sells out as soon as it’s released each year.

Dubbed “everyone’s jacket” on the Internet, the jacket has found fans in celebrities who have been photographed wearing it by the media.

“I think the reason North Face is so popular is because all the famous celebrities are wearing it,” said Michael Anthony Edens, a senior at Global Christian School. “If you say ‘padding jacket,’ we instantly think of North Face.”

But the North Face frenzy isn’t without its critics.

Lee Eun-hee, a professor of consumer studies at Inha University, points out that teenagers expressing themselves through their outside appearance is far from ideal.

“The only and easiest way that they can distinguish themselves is to make a visible change in their appearance by wearing jackets worn by celebrities,” said Lee. Trends like North Face mania, she said, can cause alienation among teenagers.

“I see a lot of my friends who start to wear North Face jackets flock together,” Ko said. “I honestly want to buy one but I can’t ask my parents to buy me jackets like windbreakers or [the Nuptse jacket] because they are too expensive.”

*This article was written with assistance of staff reporter Kim Mi-ju.