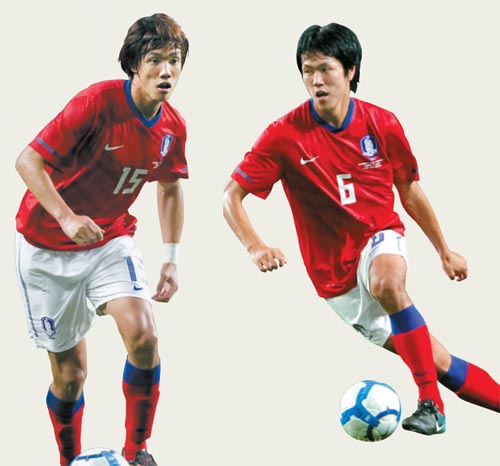 
National team defenders Lee Jung-soo and Cha Du-ri, affectionately referred to as “Goal-jungsoo” and “Chaminator” by fans, are among a group of attack-minded defenders drawing large interest from the public and changing the way prospective football players view defensive positions.

In the past, defense positions were largely cast aside by young players as unpopular. Aspiring stars favored high-profile offensive spots that make the highlight reels.

But that has changed with the help of players like Lee Jung-soo and Lee Young-pyo of Al-Hilal and Cha of Celtic FC.

Following in the footsteps of former star defenders Kim Ho (manager of the 1994 World Cup squad and former manager of the Daejeon Citizens), Kim Jung-nam (vice president of the K-League), Park Kyung-hoon (manager of Jeju United), and Hong Myung-bo (manager of the U-23 national team), Korea’s current defensive unit has proven to be strong in recent international competitions.

According to the public-opinion-poll institution Realmeter, defenders are among the most popular national-team players these days. It’s a big change from the past when forwards and midfielders dominated the popularity polls.

But Lee Young-pyo and Cha Du-ri cracked the top 10 by earning the fourth- and eighth-most votes, respectively.

In the past, defense at the youth football level was reserved for the least-skilled players.

Forwards and midfielders who scored goals were naturally rated highly by scouts in middle schools and high schools.

But this perception has changed over the years, and with the exciting play of attack-minded defenders like Lee and Cha, the increased interest in defense positions is expected to continue.

“The defense position has seen significant progress since the time I was a defender on the national football team,” said manager Park Kyung-hoon, who led Jeju United to a second-place finish in the K-League last season.

“The future of Korea’s defense is bright. Young defensive players are trained under more comfortable circumstances and given technical pointers about the weaknesses of their game.”

Another area of improvement is the increased number of grass and artificial-turf football fields in Korea. Until recently, one of the biggest flaws at the grassroots level was the lack of support to maintain facilities.

One of the most essential skills for defenders is the ability to stop opposing players with slide tackles.

But it is hard to properly train to slide tackle on dirt fields covered in pebbles and other unwanted particles.

*This article was written with the assistance of Korea JoongAng Daily staff reporter Seo Ji-eun.