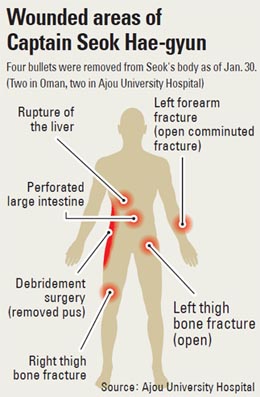 Captain Seok Hae-gyun survived his flight home, surgery and his first night in Korea and his doctors said he is showing tiny but steady signs of improvement.

“Seok’s vital signs have gotten slightly better, but the scale of his gunshot wounds is making it difficult for the blood poisoning and disseminated intravascular coagulation to improve,” said Ryu Hee-sug, director of Ajou University Hospital.

Ryu also said today that Seok’s temperature, which was 38.6 degrees Celsius (101.5 Fahrenheit) three days ago, had fallen to 37.4 degrees.

“We see it as a sign that the infections are getting better,” he said.

The hospital said earlier in the day that Seok is sedated and in a separate ward from other critical patients due to his condition. A date for an additional operation has not yet been set.

The hospital said Seok’s family members cannot visit him too often because of the risk of bringing contaminants into the hospital. They did not disclose whether Seok’s family was able to visit him yesterday. Visits were allowed on Sunday after Seok’s wife and son arrived from Oman, said the hospital official.

An officer at the South Suwon Police Station said the family is currently in a state of shock because media reports described Seok’s condition as bad and mentioned that today or tomorrow may be critical to his survival.

The Minister of Land, Transport and Maritime Affairs visited the hospital late in the afternoon yesterday and met with family members to console them.

The skipper of the Samho Jewelry is rehabilitating after going through a three-hour surgery Saturday night following a flight in from Oman. The doctors operated on all his injuries, especially focussing on his right side, where much of his skin and muscle tissue had turned necrotic due to infection.

The doctors at Ajou University Hospital said on Sunday that the next few days would be “crucial” to Seok’s recovery.

“I know you have been doing well so far, but please lead the situation well so that Captain Seok may rise from his bed,” Lee said through Kim. “Many citizens have high expectations and are cheering [for you]. I know that you will be on call throughout the Lunar New Year holidays, and thank you.”