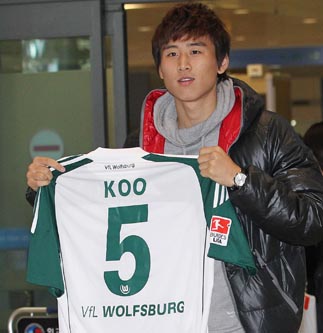 National team midfielder Koo Ja-cheol is optimistic about his future after reaching a deal on Sunday with VfL Wolfsburg of the German Bundesliga. Koo returned to Korea from Germany yesterday after reaching a three-and-a-half-year deal with Wolfsburg worth two million euros ($2.7 million).

“It’s a new beginning,” said Koo. “I met the manager, coaching staff and Makoto Hasebe [the Japanese national team captain] during my visit. I watched one league game and it was exciting.

“I have to showcase my skills at Wolfsburg in order to continue to develop into a better player.”

Wolfsburg officially announced yesterday the signing of Koo and two other players - Yohandry Orozco of Venezuela and Tuncay Sanli of Turkey.

“Koo is a versatile midfielder with a very promising future,” said Wolfsburg business manager Dieter Hoeness. “We don’t have a lot of depth at midfield and the addition of Koo will be a big boost.”

Meanwhile, BSC Young Boys of the Swiss Super League is expected to file a complaint with FIFA, the international governing body of football, over the Koo Ja-cheol signing.

BSC Young Boys is claiming it had reached an agreement with Koo in January and that the Jeju United midfielder breached their contract by signing with Wolfsburg after a successful outing at the 2011 Asian Cup.

Koo has been linked with BSC Young Boys since the end of the K-League season and met with Young Boys officials in Switzerland in early December. Jeju United, the team Koo played for through the end of last season, hadn’t given consent to the Young Boys transfer request.

If FIFA finds Koo at fault for breach of agreement, the 22-year-old midfielder is expected to be fined.

He then started on the 2009 U-20 World Cup squad and captained the U-23 national team at the 2010 Guangzhou Asian Games. Koo had a breakout season with Jeju United last season, scoring five goals and adding 12 assists to lead his team to a second-place finish.

Coming off a successful season in the K-League, Koo made a smooth transition onto the senior team with a big outing at the 2011 Asian Cup.

Replacing the injured Park Chu-young as a forward, Koo emerged as one of the young stars on the national team by leading the Asian Cup with five goals and three assists in six matches.