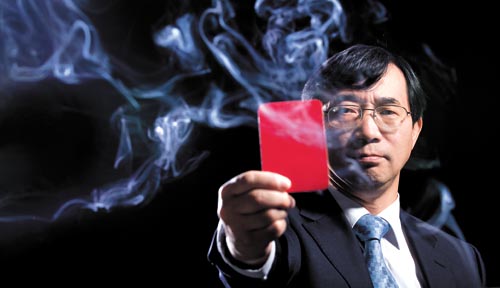 
Many smokers have already broken their New Year’s resolution to kick the habit, and you can bet a fair share of them are embarrassed by their inability to stop lighting up.

This is the target demographic of Seo Hong-gwan, 53, a senior doctor at the National Cancer Center.

Seo became a non-smoking evangelist in 1987 after quitting his decade-old habit. Last year, he took the chairman post at the Korea Non-Smoking Movement Council, a non-governmental organization.

Also a poet, he has written poems about giving up alcohol and is bracing to write one about stopping smoking. He claims that the price for a pack of cigarettes, about 3,000 won ($2.72), should be doubled to at least 6,000 won. He also thinks homes should be designated as non-smoking areas - a controversial idea that could anger Korea’s 10 million smokers.


Q. What motivated you to launch an anti-smoking movement?

A. I began smoking in 1977 and quit in 1987. I thought I should quit before encouraging patients to do so. About 80 percent of male adults smoked when I was in college. Smoking and drinking after getting into college was taken for granted. Then the government tried to lift the ban on imported cigarettes. College students protested against the plan, claiming the measure meant yielding to U.S. trade pressure. I wrote the draft for a statement against imported tobacco. Writing the document, I had to deliberate on the dangers of smoking. Then I realized smoking was a crazy thing to do. I quit smoking right away.


You meet a lot of smokers via your patients, don’t you?


Even so, many can’t really quit smoking.

There is this housewife in her 40s. She smoked secretly when her husband went to work and the kids went to school. She thought her long-time habit was needed to relieve stress. Her health conditions constantly grew worse, and her guilt as a mother and wife made her determined to quit. But each time she tried to quit, she failed. She is now going through therapy to quit. I see patients with lung or tongue cancer whose days are numbered but they still haven’t quit smoking. Smoking is such a scary addiction.


What are measures we can take to reduce the smoking population?

Raising tobacco prices would be a very effective policy. The World Health Organization and the European Union encourage their member countries to implement the policy. According to a report from the World Bank, a 10 percent rise in tobacco prices leads to a demand reduction of 4 to 8 percent. Non price-related measures such as expanding non-smoking areas are also crucial. [According to a report from the WHO in 2009, Russia and China, where a pack of cigarettes costs less than 1,000 won, have smoking rates of 60.4 percent and 57.4 percent, respectively, in the male adult population. On the other hand, Canada and Australia, where the prices range between 7,000 won and 9,000 won, had smoking rates of 16.4 percent and 18 percent for the same demographic. In Korea, the average price for a pack of cigarette was 2,500 won at the time of the study, and smokers accounted for 42.6 percent of all male adults.]


But wouldn’t smokers aggressively oppose such a move?

Korea’s cigarette prices are about one-sixth of those in other developed countries. There are some people who claim the cigarette price hike is aimed at collecting more taxes, which means increased spending among ordinary citizens. But there would be less of that type of criticism if the government used the taxes from cigarette sales to help smokers, such as offering medical insurance for those who quit.


You claim that homes should be designated as non-smoking areas.

A large number of smokers can’t really smoke inside their house. Instead they smoke at the terrace or the corridors of their residence. This causes indirect smoking for their neighbors. You may protect your wives or children by smoking outside your house but deal a blow others.


What are they supposed to do, then?

I think you need to smoke outside the building. The government should designate more apartments for complete smoking bans and prohibit smoking in parking lots, playgrounds and staircases as well. The impact of second-hand smoking is huge, given that 10 million people are smokers out of a total population of 50 million.


How much should a pack of cigarettes cost?

I would say 6,000 won, a level similar to that in many Western countries. The problem is how to proceed with a price hike. The power only comes from the general public.


What was your secret behind quitting smoking so easily?

A firm resolution to quit smoking is the most important. The majority of those who fail haven’t been motivated sufficiently. Once you are determined, you need to undergo a handful of pharmaceutical and behavioral therapies.


How long should these medical therapies last?

It takes at least three months for you to get through the addiction stage. The costs vary according to hospitals but the budget is around 300,000 won. But that amount is small compared to the amount of money you spend on cigarettes over the years.


How do you conduct your different jobs?

Life isn’t simple. I realize that communications and negotiation are crucial. For instance, there is a patient of mine who suffers from high blood pressure. But when I encourage him to take medication, he refuses to do so and instead works out or loses weight. Once you have high blood pressure, the blood vessels continue being damaged. So I have to persuade the patient to change his mind.