Left: A black-and-white photograph taken in the 1930s shows a tomb painting of a white tiger. The photograph on the right shows the state of degradation of the same painting. Provided by National Museum of Korea and Park Gwang-seob


In the first extensive analysis since they were discovered in 1933 in good condition, scientists recently concluded that negligent maintenance of rare sixth-century tomb paintings has resulted in their being damaged beyond recognition.

The paintings in the sixth tomb of the Songsanri Burial Mounds in Gongju, South Chungcheong, are representative relics of the Baekje Period (234-678).

“It had been possible to recognize the shape of animals painted on the wall in photographs taken during the Japanese occupation [1910-1945], but now the subjects are unrecognizable,” lamented Professor Han Gyeong-sun of Konkuk University.

“Failure to control the temperature and humidity levels seem to be the reason here,” she added. 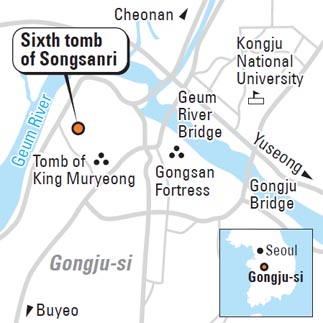 The paintings - known as sashindo - depicted four animals associated with municipal defense: a blue dragon in the east, white tiger in the west, phoenix in the south and snake and turtle in the north.

Last March, cultural preservation experts began the first scientific analysis on the 1,500-year-old murals since they were discovered 70 years ago.

Their conclusion was devastating.

The murals were found to be seriously damaged due to exfoliation.

The experts put the blame on the decision to open the tomb to the public in 1972, which created an unstable environment for the paintings.

After being relatively stable for longer than a millennia, temperature and humidity levels fluctuated after the tomb was opened, and airborne contaminants degraded the quality of the murals.

Noticing degradation, the tomb was again closed to the public in the 1990s, while efforts were made to preserve the ancient art. The temperature and level of humidity were kept at constant levels.

It was too late.

“To prevent microorganisms from breeding within the tomb, the humidity level was kept very low. However, this measure backfired. The dryness caused cracks in the outer clay of the murals,” said Han.

What’s worse, the poorly conceived preservation measures caused cracks to form in the foundation of the tomb, which scientists now say might cause it to collapse.

“We need to closely analyze the clay materials on the outer surface of the murals as we proceed to study how to remove microorganisms that have made a home on the walls of the tomb,” said Professor Jeong Yong-jae of the Korean National University of Cultural Heritage, who is responsible for research. He held a symposium in Gongju National Museum last Friday.