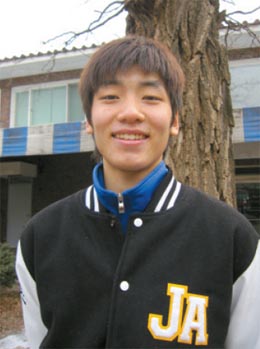 Busan Jungang High School’s sophomore point guard Chun Ki-beom stands out among his peers. At 187-centimeters (6 feet, 1 inch), the 17-year-old is among the tallest high school point guards in the country but his on-court skills also set him apart from other players his age.

While it’s normal for growth spurts to taper off after middle school, Chun is still growing at an impressive pace and added 6 centimeters to his frame last year. That’s one of the reasons why those in basketball circles are excited about the prospect of Chun developing into an all-around point guard with a size advantage.

At a national high school basketball tournament preliminaries game against Pai Chai High School in Seoul on Monday, Chun scored 27 points and added three assists and six steals to carry his team to a 70-60 win.

While there have been several point guards with height in the past, what has scouts from major collegiate basketball programs drooling over Chun are his scoring, dribbling and passing skills. Despite being the target of Pai Chai High School’s defense and being double- and triple-teamed throughout the game, Chun penetrated the opposing team’s defense and assisted on baskets with ease. In Korean high school basketball, which places emphasis on teamwork over creativity, Chun is a rare breed.

“We place more emphasis on nurturing talent than solely focusing on winning games,” said Busan Jungang head coach Kang Yang-hyun. “I will yell at Ki-beom if he stops in his tracks and looks to pass when a defender appears in his way. He has to work to get past that first defender or at least draw a foul.”

It’s been an effort on Kang’s part to continue to develop Chun into a top flight point guard.

“Coach encourages me to try whatever I want on the floor,” said Chun. “I’m confident I can drive past anyone at this level.”

Despite being a point guard, Chun has the added pressure of leading his team in scoring as the lone star player on his squad. Chun has been doing that from the time he started playing basketball in the fourth grade at Kimhae Dongkwang Elementary School in South Gyeongsang.

“We only have seven players on our squad and since we lack depth, we need Ki-beom to take on the load, but he also has great court vision,” said Kang. “Ki-beom was a pass-first point guard when he arrived but I asked him to increase his scoring.”

Chun said Kim Sun-hyung - who was drafted by the SK Knights second overall in this year’s KBL draft - is his favorite player. Storied collegiate basketball programs like Chung-Ang University, Korea University and Yonsei University are already showing strong interest in Chun, but he is focused on signing with the program that best suits his needs.

“I want to attend a school where I can earn loads of playing time rather than join a school on name value alone,” said Chun.