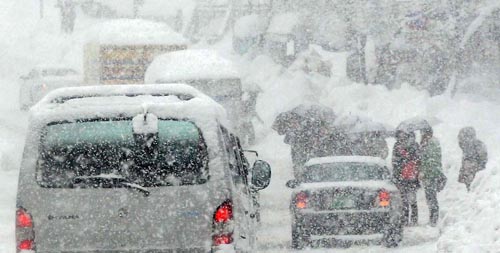 Heavy snow comes down again yesterday in Gangneung, an eastern coastal city in Gangwon province that was already covered with heavy snow over the weekend. By Byun Sun-goo


As a second storm in a matter of days howled into the weary east coast yesterday - adding up to another 50 centimeters (19.6 inches) of snow to the region - residents, public workers and military forces were mobilized to rescue stranded residents and clear snow from damaged houses and blocked roadways.

The record snowfall in Gangwon, which began Friday, has isolated hundreds of residents and caused one elderly person’s death, according to Gangwon Provincial Government’s Disaster and Safety Management Office.

Snow removal operations kicked into high gear, with the Gangwon Provincial Office dispatching 22,600 people and 1,750 pieces of equipment to help in three of the province’s major cities, Gangneung, Donghae and Samcheok.

Gangneung ordered an official snow-removal day yesterday, asking all residents to shovel snow off areas near their homes.

Some Gangwon residents managed to commute to work on foot yesterday by wearing an assortment of hiking gear. Some even went with a shovel in hand to clear snow that obstructed their progress.

Seongnam and Gwangju, in Gyeonggi, sent help to nearby Gangwon.

“We’ve decided to support Samcheok with manpower and equipment, as the isolation of residents is being prolonged and there is huge property loss,” said a Seongnam official.

Gwangju officials deployed a team to Donghae, which was hit with 100 centimeters of snow. Three dump trucks and 10 people were sent out along with food for isolated residents.

The Ministry of National Defense announced yesterday that it would send 8,125 more soldiers from 10 military camps, along with 286 trucks, to help in the effort.

That’s on top of the current 11,936 military personnel and 375 pieces of equipment that were deployed last Friday. It also sent out 11 helicopters to deliver necessities to isolated residents.

As snow-removal operations hit their stride, about 960 residents have been rescued in the region, according to Yonhap News Agency. But 310 more residents are believed to still be trapped in their homes.

The Korea Meteorological Administration forecasted yesterday that the eastern part of Gangwon would see between 10 to 50 centimeters of snow through the night.

The region has been hit with the most snow in 100 years, according to officials.

“Moisture from the relatively warm ocean surface has met with cold air in the upper atmosphere, resulting in heavy snow on the east coast,” the KMA said.

The Gangwon Disaster and Safety Management Office said yesterday that initial estimates of damage were 6.6 billion won ($5.8 million), adding that the amount is expected to increase to more than 10 billion won.

Meanwhile, a heavy snowfall watch was issued yesterday for 13 cities in South Gyeongsang.