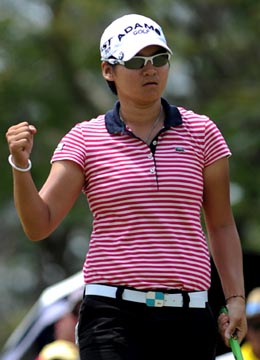 PATTAYA, Thailand - Top-ranked Yani Tseng earned her third tournament win in three weeks Sunday, shooting a 6-under 66 to pull away for a comfortable five-shot victory over Michelle Wie in the LPGA Thailand.

Tseng led by one stroke over Wie and Kim In-kyung going into the final round of the season-opening LPGA event and had the lowest score of the day with seven birdies and one bogey to finish at 15-under 273.

Wie settled for a 70 to finish second, while Kim had a 71 and was another stroke back in a tie for third with Karrie Webb, who shot a 69. Paula Creamer was fifth at 8 under after a 71.

Tseng took over the No. 1 ranking after winning back-to-back Ladies European Tour events, the Australian Open and then the Australian Ladies Masters last weekend.

“I just tried my best and I know I had lots of confidence,” Tseng said about winning three weeks in a row. “But with all the great golfers out here, you never know until the last putt drops in.”

Kim birdied three of her first six holes to sit tied for the lead with Tseng, and was at 13 under after a birdie on the 13th.

However, she made a quintuple bogey on the 17th to fall out of contention, before finishing with a birdie to secure a tie for third.

Wie also put pressure on Tseng by chipping in for a birdie on the first hole and picking up two more shots on the sixth and seventh.

But she didn’t make another birdie the rest of the way and was four shots behind Tseng when she bogeyed the 17th.

“I feel like I played good out there today, but on the back nine I just didn’t make anything,” Wie said. “Yani played fantastic. She played like a rock star out there. She made every single putt and zero mistakes. Congrats to her.”

Tseng will go for a fourth straight victory next week in Singapore.

“I have lots of confidence and I’m looking forward to next week to see if I can win,” she said. “I feel very excited every week. I just focused on this week.

“I think to myself, ‘Last week has passed, don’t put pressure on this week.’ Next week is a new week and I’ll enjoy it.”