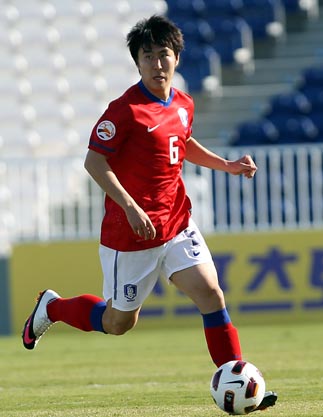 Defensive midfielder Lee Yong-rae has reached his goal of securing a place on the national football team, although he took a little detour to get there.

The 24-year-old was once considered one of the top high school prospects in all of Korea and went on to play collegiate football for the Korea University squad. The momentum continued when Lee was among the select few chosen by the Korean Football Association to train abroad in Metz, France, in 200, and the following year he was on the U-17 Finland World Cup squad.

While Lee appeared to be on the fast track to join the national team, he hit a bit of a snag, injuring his right ankle leading up to the 2005 U-20 Netherlands World Cup. The injury bug then bit again, with Lee hurting his pelvis while competing for Korea University. He struggled to find his form after returning from his injuries and went undrafted in the 2008 K-League Draft. But Gyeongnam FC and its manager, Cho Kwang-rae, took a chance on the former blue-chip prospect, signing the rookie for the 2009 season.

After scoring a 10 goals and adding seven assists in his two seasons with Gyeongnam FC, Lee inked a deal with the Suwon Samsung Bluewings this offseason. The stars then aligned for the versatile midfielder. Cho, his former coach, was tapped last summer to lead the national team. The manager selected Lee in January to join the team for the 2011 Asian Cup, where Korea finished third. Lee started alongside Ki Sung-yueng, providing stability on defense and also contributing to Korea’s offensive attack. The JoongAng Ilbo sat down with Lee to talk about his career and expectations going forward.


Q: How are you adjusting to your new club?

A: Prior to joining the Bluewings, I was a bit worried as to whether I would fit in O.K. Everyone’s been supportive here and I’ve made adjustments in practice games.

Who’s been the most helpful?

To be honest, I don’t know a lot of the players here. Some of the veterans have provided the most help.

Your current manager Yoon Sung-hyo mentioned that he failed in his attempt to recruit you to play at Soongsil University. Do you remember?

In high school, it was my dream to play for Korea University. Manager Yoon put a lot of time and effort into recruiting me to play for Soongsil at the time. If I had known then that I would meet him again in this manner, maybe I would’ve played for Soongsil to begin with.

How is the team atmosphere compared to Gyeongnam FC?

Gyeongnam is not ranked very high in the league. Samsung Bluewings is different. It’s full of talented players and I have renewed optimism joining such a team.

Manager Yoon Young-hyo emphasizes a strong passing game. Will this be a big adjustment for you?

I know his style well. The Bluewings and the national team share a similar style of play and it should not be too difficult to adjust to.

You were once ranked the top high school prospect in the country. What do you think about your career so far and what are your goals?

I think I’ve reached about 50 percent of my goals. My ultimate goal is to reach a contract with an overseas club.

What do you hope to accomplish with the Bluewings?

I want to help the Bluewings win the AFC Champions League. I play the defensive midfield position but I also want to contribute on offense.

The Bluewings face their archrivals FC Seoul in the season opener. What are your thoughts on the game?

FC Seoul boasts a good group of overseas talent but it has a weak defense. Since we have a strong attack, I think we can take the game 2-0.