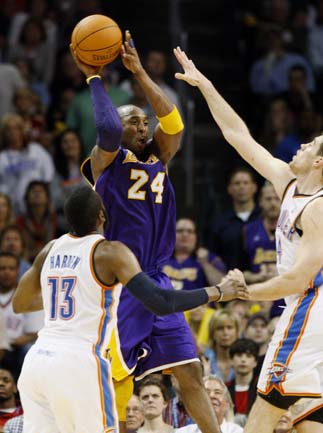 Andrew Bynum added 16 points and 10 rebounds and All-Star Game MVP Kobe Bryant finished with 17 points for the Pacific Division-leading Lakers - who beat the Thunder for the 14th time in their last 15 contests.

The Thunder had two late chances in the closing moments to potentially send the game into overtime but Kevin Durant and James Harden both missed 3-pointers that would have tied the game at 90.

“We were fortunate to come away with that win,” Lakers coach Phil Jackson said. “Two shots like they had at the end of the game, [they were] good looks but we did the job in the second half defensively.”

Russell Westbrook had a team-high 22 points for the Thunder and Durant added 21, but Oklahoma City was held to a season-low 31 second-half points.

Serge Ibaka, of the Democratic Republic of Congo, finished with a game-high 13 boards and six points for the Northwest Division-leading Thunder.

Lakers forward Lamar Odom missed a pair of free throws with 10.9 seconds remaining that made room for the potential game-tying 3-pointers by Durant and Harden.

Harden finished with 14 points off the bench for Oklahoma City.

“That was a very intense basketball game,” Thunder coach Scott Brooks said. “I thought we played physical and we matched their physical play.”

Shannon Brown sank a pair of free throws with just more than eight minutes remaining in the fourth quarter to give the Lakers the lead for good, 78-76.

The Thunder traded for Kendrick Perkins, Nazr Mohammed and Nate Robinson this week, but none of the three were in the lineup Sunday.

Oklahoma City, which had its first three-game losing streak of the season after the loss to the Lakers, was trying to bounce back from a blowout to Orlando on Friday.

With about 25 percent of the NBA season remaining, top teams in the Western Conference like the Thunder and Lakers are jockeying for the best position possible before the playoffs begin in April. AFP