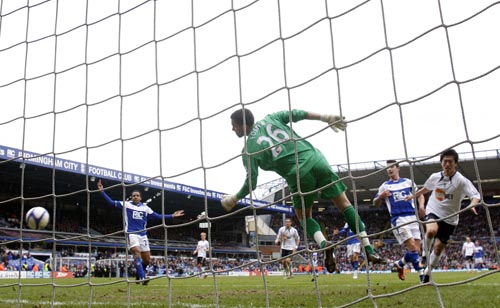 
LONDON - Lee Chung-yong’s header in the 90th minute gave Bolton a 3-2 win over Birmingham on Saturday and a ticket to the English FA Cup semifinals. In Saturday’s other quarterfinal game, Manchester United's two goals came from Fabio and Wayne Rooney and proved to be enough to beat Arsenal 2-0.

Bolton will be contesting its first FA Cup semifinal since 2000 when it lost to Aston Villa.

After the visitors twice threw away the lead, Korean winger Lee ghosted into the penalty area to meet Kevin Davies' header across the goal to nod in Bolton's winner in the 90th minute.

“Lee is capable of playing for any team,” Bolton manager Owen Coyle said. “He hasn't had a break for two years though and we have to be careful with him.”

Lee made an impact with his first touch after coming off the bench with 30 minutes to go, clearing the ball off the line from David Murphy following Sebastian Larsson's corner.

Kevin Davies restored Bolton's lead with a 66th-minute penalty after being tripped by defender Curtis Davies.

Meanwhile, Arsenal went out of a third competition in two weeks on Saturday when Manchester United reached the FA Cup semifinals with a 2-0 victory that vindicated manager Alex Ferguson's selection gamble.

Seven defenders started for United and left-back Fabio da Silva, playing in midfield, opened the scoring before striker Wayne Rooney headed in another in the second half.

“We got our goals, luckily I pulled off a couple of saves and we defended well,” United goalkeeper Edwin van der Sar said.

The Gunners' hopes of a first trophy since the 2005 FA Cup now rely on overhauling United's three-point lead in the Premier League after Barcelona ended their European campaign and Birmingham beat them in the League Cup final.

Ahead of the Old Trafford match, both managers shared the same plight. Governing bodies have charged Ferguson (the FA) and Arsene Wenger (UEFA) over their conduct toward referees, while a miserable run of results left them both in need of a cup win.

But after United bounced back on Saturday from Premier League losses to Chelsea and Liverpool, it is Ferguson who is in buoyant mood as his focus shifts to Tuesday's last 16 Champions League match against Marseille.

With one eye on beating the French side after drawing 0-0 away, Ferguson deployed an experimental side packed with defenders that recognized the ability of Fabio and twin Rafael da Silva to play in more attacking roles on the flanks.

Rafael could have put United in front when his brother whipped in a cross had his header been directed lower.

But Fabio found the net in the 28th minute after starting the move with a surging run.

Having set up Rooney's cross for Javier Hernandez, whose header was palmed away by goalkeeper Manuel Almunia, Fabio tapped the rebound into the net.

Rooney extended United's lead four minutes into the second half.

After latching onto Rafael's cross, Hernandez 's header was blocked by Almunia, but Rooney met the loose ball with a header that lacked power but fell into the net.

Arsenal's misery was compounded when defender Johan Djourou was stretchered off after dislocating his right shoulder in a collision with teammate Bacary Sagna as Almunia stopped Hernandez scoring a third. Having used all three substitutes, Arsenal had to play with 10 men for the last 10 minutes of the match.