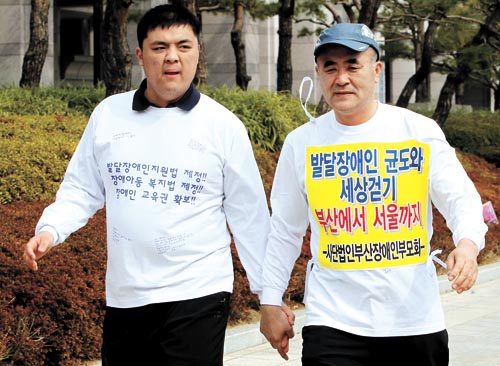 Lee Jin-seob, right, and his son, Gyun-do, who is autistic, are halfway to their goal of walking from Busan to Seoul to raise awareness of the challenges facing people with disabilities, including autism. By Song Bong-geun


No mountain is too high for a father and his son as they walk across the country to raise awareness of the plight facing disabled people in Korea.

Lee heads a social welfare counseling center in Gijang County, Busan. He and his son are walking 15 kilometers per day to complete their goal. Gyun-do is autistic.

The Lees aim to arrive at the National Assembly in Seoul on April 20 for an event marking Persons with Disabilities Day.

On March 16, they were walking on a country road linking Yangsan and Miryang, South Gyeongsang.

When the father said, “I can do it and so can you,” his son repeated the words.

During the journey, Lee said a rope keeps him and his teenage son together.

“Gyun-do is 180 centimeters [5 feet 11 inches] tall and weighs 100 kilograms [220 pounds],” Lee said. “There’s no way I can control him if he becomes overly excited. He could jump into the middle of the road or run away.”

Lee quit his job 10 years ago to look after his son. His wife runs a small coffee shop in Busan.

Lee earned a diploma in social welfare from the Catholic University of Pusan last year and opened the counseling center for parents with disabled children.