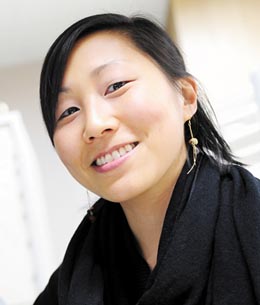 Katrine Flarup Jensen came back to the country of her birth on March 18 to work as a researcher at the Konkuk University-Fraunhofer Institute Solar Energy System Next Generation Solar Cell Research Center (KFnSC). She came to Seoul as one of three researchers from the Fraunhofer Institute and will spend at least a year here.


Jensen and her twin sister were adopted by a Danish family when they were three months old. Jensen’s Korean name is Cho Il-kyung. After receiving a master’s in Germany, Jensen earned a position at Germany’s world-renowned Fraunhofer Institute. Soon after, she applied for the job in Korea.

Jensen said the recent nuclear disaster in Japan has caused its government and Korea to consider alternative energy sources.

“Because of the nuclear incident in Japan, both Koreans and the Korean government became interested in alternative forms of energy, which I see as a desirable trajectory,” Jensen said in a recent interview at KFnSC.

KFnSC conducts research on solar energy and was launched in 2009 with financial support from the Seoul Metropolitan Government.

“I am truly lucky. I have come to work in Korea through such a good opportunity. And I have reunited with my birth parents and three Korean sisters,” she said.

These days, she studies Korean for two hours a week. She demonstrated her skills by speaking in Korean at the end of the interview.