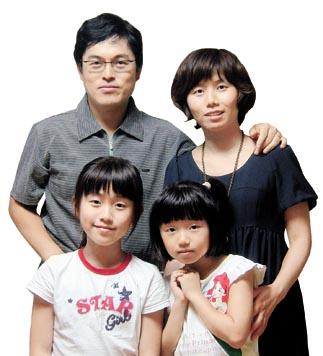 Lee Sang-woong, 42, and his wife Kim Jeong-eun, 40, said they have 114 children in 24 countries around the world, including their two biological daughters Joo-hee, 13, and Joo-won, 10.

Lee, a doctor, has been donating 3.51 million won ($3,237) per month to both domestic and international children in need for 13 years. The couple’s two children return 30 percent of their allowance to their parents to go to charity. In all, the family supports 112 kids in Korea and abroad.

“Children’s hearts need to be trained to help the needy at a young age,” said Lee.

Lee and his wife, who reside in Daejeon, became interested in helping children in need in 1998, two years after they got married. “When my wife gave birth to our first daughter, she read a newspaper article about children starving to death in the third world and said she wanted to make donations. We started off with 30,000 won per month,” said Lee.

Not long after, the couple became the largest sponsor for Korea Food for the Hungry International’s Child Development Program. When Lee opened up his own private clinic, the couple began adding 10 children a month to their help list. The program supports foreign children with 30,000 won per child a month and 60,000 won for a child in Korea.

In 2008, the couple decided to “form a habit of donation” in their two daughters, who are both in elementary school. The children sponsor two young girls from Kyrgyzstan and Romania every month. They give 5,000 won to 10,000 won per month to their two “sisters,” whom they have never met.

“I teach my two girls that a purpose of being educated and studying hard is also to help the people around them. Life has no purpose if you are the only one eating and living well,” said Kim.

She added that she appreciates her daughters’ obedience in following their parents’ requests without complaint. “I’m sure the girls feel a sense of pride and satisfaction,” their mother added.

Last year, Lee’s family donated a total of 75 million won through the Child Development Program, in which a child in need is matched with a sponsor, supporting the child’s health and education expenses.