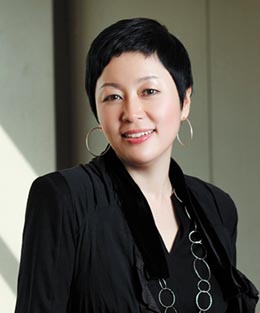 Serviced offices provide office space, a secretary and services needed for a company to take its first steps in a new region.

In an interview, Kim said she was curious about the world and international business since growing up in Busan. She now has over two decades of experience.

“After graduating elementary school, I began learning English at Busan’s only English institute and setting my eyes on native English speakers was a culture shock and an eye opener for me,” said Kim.

Kim started her career at Citibank expecting active interaction and international travel. But after that didn’t materialize, she quit. After going through two more jobs with foreign companies in Korea, she decided to make the move abroad to study marketing in Australia. She then got a job with Servcorp, one of the few serviced office operators at the time.

For Kim, everything was on the up and up. She became head of operations in Bangkok and Jakarta before becoming the Asia Pacific director. But just as she began to feel that she had been making significant achievements for the company, she was faced with the fact that being a woman, Asian and Korean imposed limitations on her career path. So she decided to set up her own business, founding the first branch of CEO Suite in Jakarta.

Jakarta proved to be a great challenge for Kim. One year after opening the branch, the Asian financial crisis hit. She said that the Indonesian rupiah to the U.S. dollar skyrocketed to about 20,000 rupiahs from 2,200 rupiahs. Most foreign companies exited as a result. But Kim stayed, seeing it as an opportunity.

The new Seoul location brings the number of branches to 12 in eight cities and seven countries. CEO Suite has grown into a company with annual sales of about $30 million.

Kim said that her social network has made the company one of the best in the industry, with about 650 office spaces.

“We provide everything from legal, financial issues to setting up press conferences, video conferences, creating business networks and even contacting our global offices to provide effective solutions for our clients,” said